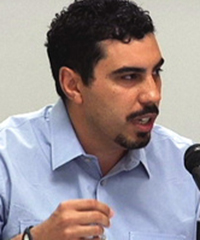 Alejandro E. Carrión is currently an Andrew W. Mellon postdoctoral fellow in the Latino & Latina Studies Program at Northwestern University and holds a PhD in Urban Education from the CUNY Graduate Center. He has conducted extensive research on Latino men and education in the U.S., specifically focusing on the transition to college, the development and implementation of bilingual education policy, and the powerful role that habitus—deeply ingrained psychological and physical ways of being and attitudes towards the social order— plays in shaping the Latino male experience of education. He has worked on numerous programs and committees at CUNY Hostos Community College in the Bronx, NY, and in a variety of educational positions focused on providing college access and educational transition resources to the Latino communities of New York City.

Dr. Carrión has been at the Dominican Library conducting original research that analyzes young Dominican men’s pathways in education in the United States. Specifically, he is constructing the first working timeline of Dominican students, parents, teachers, and activists, and their interactions with educational institutions in the United States. Dr. Carrión hopes to place the Dominican experience within a larger genealogy of struggles for educational equality. He has also been instrumental in constructing a similar timeline for the CUNY New York State Initiative on Emergent Bilinguals, which traces the development of bilingual education policy.

While discourses around bilingual education in the U.S. have tended to reference and spring from Puerto Rican social movements, Dr. Carrión notes that there has been a critically important Dominican influence as well, and feels that broadening the history of Latino education to include Dominicans problematizes and transforms previous genealogies of struggles to expand access to education. There is currently very little academic literature on Dominicans and education in the U.S., and no research on education that treats both Dominican and Puerto Rican cases comparatively, an absence that Dr. Carrión’s work seeks to remedy.

Dr. Carrión credits the Dominican Library’s Sarah Aponte as having been invaluable in guiding his research with her own varied expertise in DR history, such as her knowledge of the history of Dominican women’s education, which has provided a useful comparative case study to his own work. As he carries out research in the Library he is also looking at the social and political history of the institutionalization of universities within the Dominican Republic, noting that “the first institution of higher education in the Americas was founded in the DR, as was one of the first public schools. The institutionalization and social structure of education for Dominicans has a long, important history that should be made available to other students, scholars, and activists.”