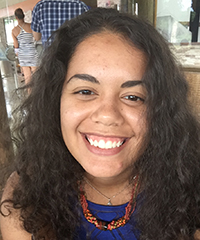 Génesis Lara is currently a doctoral student in History at the University of California Davis. She has a B.A. in History from the University of Florida, where she served as Latina/o Diaspora in the Americas Project Coordinator with the Samuel Proctor Oral History Program. Lara’s areas of research include Dominican anti-imperial and anti-colonial struggles, the role of labor unions in revolutionary political movements, and the Cold War in the Caribbean and Latin America.

Lara is currently conducting research on the roughly five-year Dominican Revolutionary Period, which began with the assassination of Trujillo in 1961 and lasted until 1965. Specifically, she is interested in studying the contours and claims of the Dominican Revolutionary movement as it shifted from a domestic focus—the removal of the Trujillo family from positions of power and the establishment of a democratic system of government—and began to organize around the issue of U.S. imperialism in the D.R. and a call for the complete cessation of U.S. involvement in the country. While histories of this period have tended to focus almost exclusively on the Partido Revolucionario Dominicano, Lara instead explores the role of Dominican labor unions and political resistance groups of Dominicans in exile in shaping the political struggles of this tumultuous period. These groups were crucial in the 1963 election of the Partido Revolucionario Dominicano and also helped to develop an anti-imperialist political vision. Lara will also be looking at the relationships between exiled Dominican revolutionaries and Cuban leaders, as Cuba took in these exiles and also helped to support their political struggle.