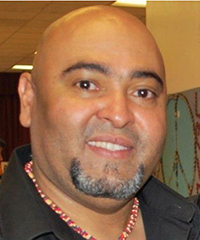 Juan Nicolás Tineo is a doctoral student in the Hispanic and Luso-Brazilian Literatures and Languages Department at the CUNY Graduate Center. He holds a BA in Education with a concentration in Humanities from the Universidad Autónoma de Santo Domingo and an MA in Education with a concentration in Hispanic Language, Literature and Culture from Queens College, CUNY. At the CUNY Graduate Center, he has been studying Latin American literature of the 20th and 21st centuries. His doctoral research topic is Blackness and Haitianness in the literature of the Dominican diaspora in the United States. Since 2001, Mr. Tineo has been a teacher of Spanish as a second language with the New York City Department of Education. Mr. Tineo is also a writer, having published several short stories, books of poems and a novel. Literature, especially poetry, has been vital to his intellectual development. His love for literature began during his high school years when he was exposed for the first time to the works of Dominican poets like Fabio Fiallo.

In 2007, he co-founded the Centro Cultural Hispano/Latino de Nueva York where he is the director of media and literature. He is also the general director of the Feria del Libro Hispana/Latina de Nueva York. As a writer publishing in Spanish, he noticed the lack of an institutional platform for interaction between Hispanic/Latino writers and the community. As a result of his planning and commitment, a space was created over the last ten years where more than 40 writers have shared their work, contributing to the enrichment of cultural life in Queens, New York.

At the CUNY Dominican Studies Institute, Mr. Tineo has consulted a great number of books and articles that have sparked his interest in further researching his doctoral dissertation topic. “The 2016 Dominican Archives & Library Research Grant has allowed me to profess in my research so much that my Ph.D. thesis proposal has now been fully written, presented and approved by the CUNY Graduate Center’s thesis committee,” says Mr. Tineo. “Now that I am going into the thesis development phase, I will continue to rely on the Library and Archives of the CUNY Dominican Studies Institute to continue my research without having to visit other places. How lucky I am to have available a specialized library in my research field in the city where I live,” he adds.

According to Tineo, the rescuing of blackness as an integral part of Dominican racial composition, and the comparison and even identification with Haitianness, have featured for a long time in the literature produced within the Dominican diaspora, marking a difference from trends in the Dominican Republic. This phenomenon, in Tineo’s view, has to be analyzed within the overall context of the immigration experience of the Dominican population in the United States. On the other hand, the writers selected by Tineo for his study have themselves been left out of the current scholarship about Dominican literature in the diaspora.  Mr. Tineo’s doctoral dissertation, therefore, aims to bring into focus a neglected cultural topic and a neglected group of writers, both of which are essential for a thorough understanding of the Dominican experience and culture the United States.

In the long term, Mr. Tineo sees himself engaged in volunteer work as a cultural promoter and writer with an important contribution to make in the Hispanic/Latino and Dominican communities in New York, as part of a larger collective effort for the survival and vibrancy of Hispanic/Latino culture and Spanish language. He sees this effort as an act of resistance, building a historical memory while contributing to the larger New York City community.