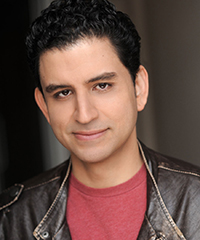 Born and raised in New York City, with roots in the Dominican Republic, Marco Antonio is a graduate of La Guardia High School for the Performing Arts in New York City and holds a Master of Fine Arts degree from Southern Methodist University.  He has acted, written, produced, and directed extensively. His most recent play, Barceló con Hielo (Barceló on the Rocks), won the national MetLife Nuestras Voces International Playwriting competition, as well as 4 HOLA awards which include outstanding achievement in playwriting. Barceló on the Rocks is an O'Neill Theatre Conference Semi-Finalist and has been published by No Passport Press in English and Spanish.

Rodríguez conducted research at the CUNY Dominican Studies Institute Library in July of 2016 while writing two new plays. The first, In the Name of Salomé, is an adaptation of Julia Alvarez’s best-selling novel of the same name and has been commissioned by Repertorio Español of New York. The novel is a fictional account of the lives of famous Dominican poet Salomé Ureña de Henríquez and her daughter Camila. As part of his research into the Dominican Library collections, Rodríguez read through books of letters exchanged between the two women and members of their family, allowing him to delve into the psychology of the characters as he produced the first stage adaptation of the novel.

Rodríguez’s second play, Casa de Campo, is the final work in a trilogy (La Luz de un Cigarrillo and Barceló con Hielo have already received productions) and takes place during the Dominican Civil War of 1965. The story follows one provincial family, who, under the rule of a traditionalist matriarch who insists they avoid any involvement in the war, discover a wounded Dominican American soldier, fighting on the American side, in their backyard. Casa de Campo examines Dominican politics and society during the short lived Civil War as seen through the lens of an intimate relationship between a family and a wounded young man fighting for the other side. To further develop the play, Rodríguez looked at accounts of provincial peoples in the Dominican Republic during the War. Rodríguez has stated that in the play, he is working to depict a time and place “where change is the only constant—when you resist it, you will drown.”

On his experience working at the Dominican Library, Rodríguez stated: “My time at CUNY DSI has thus far been invaluable.  From my initial meeting with Prof. Sarah Aponte where she shared specific anecdotes about Pedro Henríquez Ureña and the legacy he created to getting my hands on two large volumes of letters the Henríquez Ureña family wrote to each other during the course of many years.  My research is strongly driven on delving into the psychology of the people during these time periods.  Getting my hands on any material that sheds light into their day to day is of the utmost importance.  It was clear this residency was a perfect fit when on my first day, a stack of books in relation to what I am researching had already been set aside for my perusal.  It reveals a staff that has taken the time to carefully read my proposal and their desire to support and nurture my artistic endeavors towards a path of success.”