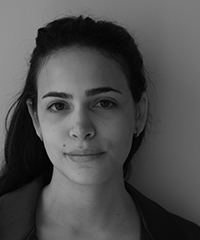 Wendy Muñiz is a doctoral candidate at Columbia University in the Department of Latin American and Iberian Cultures. Her current research focuses on the practices and the concept of the archive as they developed among the Dominican intellectual bourgeoisie at the turn of the 19th and early 20th century. For this project she has conducted research at archives in the Dominican Republic and the U.S. with the support of the Andrew W. Mellon Foundation, the Institute of Latin American Studies, and the department of Latin American and Iberian Cultures at Columbia. Her dissertation received an honorable mention as a Ford Foundation 2016 Dissertation Completion finalist.

Muñiz’s study begins after the Dominican Republic's Restoration of independence in 1865, during a period just before the country began to develop its official national archival collections in public programs and institutions. Before the formation of what would become official national archives during Rafael Leonidas Trujillo's dictatorship (1930-1961), intellectuals in the Dominican Republic developed the idea of the archive as a useful political tool. During this period, a diverse group of artists, intellectuals, and political thinkers in the Dominican Republic found the archive to be a complicated site of ruin and absence, and in response began to assemble, classify, and interpret objects they considered to comprise the national archive of their country. Her dissertation focuses on newly available evidence in the country and abroad, in formats that include print culture, archaeological artifacts, government forms, and visual art collections.

Muñiz did research at the CUNY Dominican Studies Library while writing her fourth chapter, in which she focused on the discourse around “ruins” and archive building during the first U.S. occupation (1916-1924). Writers and thinkers in the D.R. during this time convened around the issue of U.S. occupiers having literally inscribed themselves on the walls of ancient edifices, defacing the remaining landmarks of a turbulent history of colonialism. Through the efforts of the Dominican bourgeoisie, a legal case was put forth in international courts to attempt to oust the U.S. from Dominican soil. Critically, the legal case rested on the argument that U.S. occupation was a threat to the integrity of national archives and historical ruin sites. The insistence that such sites both existed and were important was thus a powerful attempt by the Dominican bourgeoisie to demonstrate that they were a sovereign nation, constructing an argument for national self-determination with the language of historical preservation and a national “archive," a term that was self-consciously far more unstable than the traditional Western conception of a historical archive.

Muñiz describes working in the CUNY DSI environment as very enriching, stating that “the institute has a one of a kind library and archive that we are privileged to have as scholars in an expanding field. The staff is a gem. They have a keen knowledge of the institute's resources and about each of our individual projects. As a result, their feedback and guidance is always personalized and on point, taking our research in unforeseen and fruitful directions while engaging us in valuable interdisciplinary dialogue.” In addition to her academic research, Muñiz also makes films that continue to explore the themes of her historical research: collective memory, collecting, and the archive.