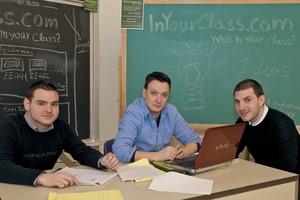 A group of students at The City College of New York (CCNY) have developed a social networking website that its founder describes as a combination of “Craigslist and a more sociable Blackboard for CUNY students.”  Called “InYourClass.com,” the site combines the features of online bulletin boards with mini social networks for 20 of the 23 colleges and professional schools in the CUNY system.  A preliminary version of the site launched February 2.

“We wanted to create a social platform for CUNY students, faculty and staff,” said InYourClass founder Arber Ruci.  “The CUNY community has more than 480,000 members, yet there is no social network designed with us in mind.”

For each individual college or site, InYourClass offers bulletin boards where members can post and respond to messages in 16 categories, including activities, tutoring, jobs, research opportunities, news, book exchange and arts and music.  The “classes” category includes a complete list of classes offered by an institution during the semester, each with its own bulletin board and forum.

“There is no real student information system at CUNY,” said Mr. Ruci, a senior from Queens, majoring in management.  He explained that while Blackboard, CUNY’s course management system, allows students to access information related to their classes, it lacks a social element that would allow students to post comments and get to know their classmates as well as what’s going on in their campus.

As of mid-February, the site had reached over 300 members.  Many are friends of Mr. Ruci or his principal collaborators, Fani Maksakuli, Arijon Xhelo, and Ardit Hamataj, all Albanian immigrants who met at CCNY.  They have begun a word-of-mouth and social media marketing campaign to promote the site and are planning an event for CCNY students 12:30 – 2:00 p.m. Thursday, February 25, in the Hoffman Student Lounge.

Mr. Ruci began working on the idea one year ago when he participated in one of the CUNY Leadership Academy’s special initiatives, the CUNY Institute for Virtual Enterprises’ social entrepreneurship program.  After developing the idea last spring and participating in a business incubator over the summer, he and his colleagues, along with several friends, built the site during the fall.  They did most of the work themselves but hired outside programmers to handle elements beyond their skill sets.

He hopes student feedback and subscriber growth will help the venture attract additional funding so it can offer additional features and expand its member base.  Initial support has come from the Office of CCNY President Robert E. Paaswell, the CCNY Auxiliary Enterprise Corp., the CUNY Institute for Virtual Enterprises and Greenproofing Inc., an environmental entrepreneurship program at CCNY.

One potential source of future capital could be the Baruch College/ Merrill Lynch City-wide Entrepreneurship competition, which awards $100,000 in prizes and start-up funds to business ideas developed by student entrepreneurs.  InYourClass.com entered the competition last fall, and has survived three review rounds to date, Mr. Ruci notes.  The winners are expected to be announced in May.