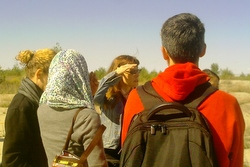 Flint, Mich., the General Motors factory town that was the subject of “Roger and Me,”  a controversial 1989 documentary by native son Michael Moore about factory closings there, is considered by many a “poster child” for aging Rust Belt cities.  It’s an unfair assessment, asserts Denise Hoffman Brandt, professor of landscape architecture in the Bernard and Anne Spitzer School of Architecture at The City College of New York.

In September, Professor Brandt took eight graduate students in her third-year studio to Flint, along with Stephen Zacks, a Brooklyn-based architecture writer who heads the Flint Public Art Project.  They spent a week touring its neighborhoods and meeting with government officials and community leaders.  Back in New York, they are immersed in a studio focused around planning and design that could trigger new economic opportunities for Flint residents.

“Flint is not shrinking,” stresses Professor Brandt.  “It is experiencing the extreme manifestation of the bust phase of an economic cycle, and we are looking at design as a contributor to an up-cycle that will see it thrive as an urban place again.”  This happened twice before in the city’s history after the logging industry and, later, carriage manufacturing went into decline, she notes.

Professor Brandt wants the studio to challenge the conventional wisdom of economic development; that there are other criteria for successful cities besides economic growth. “We’re looking at environmental planning to understand how design evolves out of planning and how it also influences planning,” she says.

Even though the closing of almost all of the city’s automobile plants decimated its economy and produced an array of social problems, including one of the nation’s highest crime rates, people living in Flint remain upbeat. “The dominant mood is ‘we can work to make the city comfortable and safe,’” she notes, adding that citizens and local leaders are looking at many new ideas to improve their city.

That loyalty to Flint as a place impressed her students, Professor Brandt adds. “Part of the mission includes imaging new futures for Flint.  This would mean getting rid of legacies like Buick City and Chevy in the Hole that are now brownfield sites.”

During their week in Flint, the class visited urban farms, wandered through abandoned industrial sites and toured a new auto plant.  They also met with Flint Mayor Dayne Walling; Doug Weiland, director of the Genesee County Land Bank; Lorna Latham, director of the Flint chapter of the Urban League, and other local leaders.

“The trip’s purpose was to engage with people in order grasp context and imagine Flint’s future,” explains Professor Brandt.  “We did no design work while there.  Our goal is not prescriptions but establishing relationships among stakeholders who have interest in rebuilding the community and its economic base.”

“A lot of our ideas were shot down by economic and safety realities,” said graduate student Julia Farr. “The priorities are to address the needs of people living there now by stabilizing areas and making them more functional so people will feel safer and can get services that were cut.”

A major focus will be connecting Flint’s most stable neighborhoods with public spaces.  Since people are unlikely to return to abandoned areas in the near future, the question becomes what to do with land in the interim, Professor Brandt explains.  For example, they will investigate how land swap scenarios can be used to move people from isolated areas to more populous neighborhoods where social and medical services are readily available and police presence remains strong.

Each student in the studio was assigned to research an aspect of Flint’s urban systems, e.g. education, riparian, energy, and come up with propositions for how Flint could reformat itself and enhance areas that remain viable. They will design specific places that reflect strategies and tactics they think the city should adapt. These will be compiled into a book format and given to the city as a set of ideas to be incorporated into the planning process.

The students are examining the interrelationships among the different systems comprising the city – environmental, industrial, commercial, residential, social services, cultural, etc. – in order to come up with a “fluid” zoning plan. “We want it to be flexible so that it can be updated as the city evolves over the next 20 – 50 years,” says graduate student Amanda Lilly.

After more than 50 years without a master plan, Flint is beginning the process of creating one, Mr. Zacks notes.  The City College studio “could be instrumental in feeding new ideas and practices that maybe weren’t as accessible.”  He adds that he hopes the students’ work can be applied in a meaningful way, so it is not just an academic project but helps improve conditions on the ground.

The studio’s work in Flint should also have relevance for other cities undergoing the bust phase of a “boom-bust” cycle, Professor Brandt maintains. “We are preparing a strategic plan that looks at cities as a system of relationships.  It can be a template for deflecting the authority of economic development as the driving force in urban planning.  Economic development is needed, but as one of the relationships, not the driver.”

She notes that lessons from New York City’s experience in the 1970s, particularly the relationship between public safety and economic growth, have relevance to Flint.  However, she hopes Flint can develop a model that surpasses that.

“New York City’s recovery led to greater economic disparity.  Flint could set up criteria for success that are economic, but reflect satisfaction and well being of the population as a whole.”