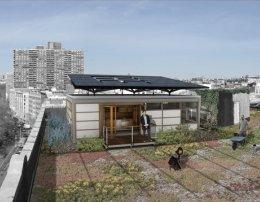 A computer-generated rendering of the CCNY Solar Roof Pod on a city roof top (Courtesy of Team New York.)

Heat Exchange within the Thermal Storage Tank
Red: Hot water coming from the solar collectors heats the paraffin-graphite composite inside the tank via four coils. Purple: A large coil in the hottest part of the tank absorbs heat to drive evaporation in the cooling system. Green: A short coil heats domestic hot water.

A unique structure in the urban landscape has arisen on a plaza of The City College of New York campus over the past few months.  Designed and built by CCNY students, faculty and team sponsors, it is meant to be installed on the roofs of commercial and residential buildings in high-density urban centers.  Dubbed the Solar Roof Pod, it showcases cutting-edge green technology inside and out, including a novel heating and cooling system with more than twice the energy efficiency of conventional units.

The Solar Roof Pod is CCNY’s entry in the U.S. Department of Energy’s Solar Decathlon, a collegiate competition to design, build and operate a solar home.  Members of Team New York – students and faculty advisors from the Bernard and Anne Spitzer School of Architecture and the Grove School of Engineering – will take it to Washington, where it will be exhibited on the National Mall and judged in the competition’s 10 categories.  It is the only entry designed specifically for the dense, urban environment.

The model’s living space and integrated garden is meant to tap the plentiful sun, rain and air of New York’s unused rooftop real estate.  Team New York contends such solar-powered smart houses could turn the bare expanses of scores of mid-rise buildings into urban oases that not only live off-the-grid, but also supply surplus energy to their host buildings.

“The pod can produce about 10 kilowatts of energy, about two times what a normal house needs,” said Christian Volkmann, associate professor of architecture and project director.

At the building’s core sits a groundbreaking climate control and energy storage system that more than doubles the energy efficiency of the best systems on the market. The innovative heating, ventilation and air conditioning system (HVAC) and its thermal storage tank capture the sun’s heat to both warm and cool the building.  It combines a novel design for heat exchange and storage with a heating and cooling system driven by solar heat and gravity alone.

Keeping rooms cool and dry demands more energy than any other building function, accounting for 75 percent of usage during the summer.  Hence, reducing the energy needed for climate control translates into big energy savings.

“The difference that we propose is the idea of using heat to transport heat,” said Professor of Mechanical Engineering Jorge Gonzalez, the faculty lead advisor on the HVAC system.

In a standard cooling system, a warm building is exposed to a chilled fluid called a refrigerant, which turns into a vapor.  In order to make it cool again, the refrigerant is compressed mechanically, an energy intensive process. “Half of the energy used by traditional buildings is for cooling and 90 percent of that is used by the compressor,” Professor Gonzalez points out.

The new system cools with no moving parts, aside from a few small pumps and little added energy.  The liquid carrying heat from the building rises as a vapor.  Instead of going to a compressor, the vapor moves into a saturated salt solution of lithium bromide.  The solution is warmed with solar heat, evaporating the vapor, which moves into the condenser and cools, restarting the process.

While everything in the electrical and mechanical system is interconnected, the novel heat storage tank developed by Professor Gonzalez and the team is central, said Maulesh Pathak, a mechanical engineering graduate student on the project. “This is the key thing of the whole project. If this stops, everything stops.”

It transfers solar heat via a system of copper pipes coiled within the thick-walled tank filled with a composite powder composed of graphite (like pencil lead) and a paraffin, or wax, that melts inside the tank. The material transfers heat well and can store it for days. “So what we have now is a very powerful thermal battery that can drive our cooling machine, or heating or whatever is needed,” says Professor Gonzalez.

Its energy efficiency towers above conventional systems. The energy efficiency ratio, or EER, for a top-notch system in current use would be about 12-15, notes Professor Gonzalez. “The EER of this system will be about 30 – that’s huge.”

Innovations in the Solar Roof Pod exterior include its modular curtain wall system.  The walls are made up of interchangeable blocks framed in sustainable poplar and birch.  Some modules feature blinds sandwiched between panes of glass that automatically close in hot sun. The glass of other modules redirects sunlight upward to light the interior.  Opaque white panels insulate, and translucent photovoltaic glass modules collect solar energy.

The photovoltaic panels on top of the pod are specially suited to a city environment.  “In New York, shade is everywhere,” noted Dave Ezzo, a solar installer with team sponsor EmPower Solar.  Partial shade from surrounding buildings, leaves or grime would reduce an entire system’s power with the standard inverters that convert photovoltaic DC power to household AC.  Instead, the team chose micro-inverters, independently linked to single panels so no one shaded panel can reduce the power of the others, he explained.

Finally, the house uses Ornilux “bird-safe” glass, which incorporates a pattern transparent to people but visible to birds, an important feature considering the house’s high perch. Professor of Architecture Hillary Brown, a member of the Bird-Safe Glass Foundation board of directors, suggested the addition.

The team projects that the total cost of this prototype will reach about $500,000. Mass production could drop the price to less than half that, they say, a bargain in the New York real estate market. “We have been calling this the Model-T roof pod,” said Professor Volkmann. It just may herald a future cityscape transformed by green roofs dotted with solar pods.