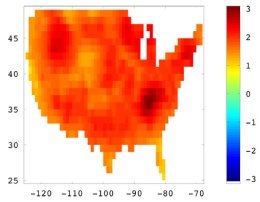 A map of warming across the nation showing how much USDA plant hardiness zones will warm, in degrees Farhenheit. (Credit: Nir Krakauer) 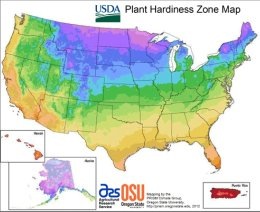 Gardeners and landscapers may want to rethink their fall tree plantings. Warming temperatures have already made the U.S. Department of Agriculture’s new cold-weather planting guidelines obsolete, according to Dr. Nir Krakauer, assistant professor of civil engineering in The City College of New York’s Grove School of Engineering.

The new USDA Plant Hardiness Zone Map, which predicts which trees and perennials can survive the winter in a given region, was a long time coming. Temperature boundaries shown in the latest version have shifted northward since the last one appeared in 1990. But the true zones have moved even further, according to Professor Krakauer’s calculations.

“Over one-third of the country has already shifted half-zones compared to the current release, and over one-fifth has shifted full zones,” Professor Krakauer wrote this summer in the journal “Advances in Meteorology.”

This means that fig trees, once challenged by frosty temperatures above North Carolina, are already weathering New York City winters thanks to changing temperatures and the insulating effect of the metropolis. Camellias, once happiest south of Ohio, may now be able to shrug off Detroit winters.

The USDA divides the country into zones based on their annual minimum temperatures – frigid dips that determine which plants perish overnight or live to flower another day. (Each zone has a minimum temperature range of 10 degrees Fahrenheit; half zones have a 5-degree range.)

Professor Krakauer found a weakness in how the agency came up with the zones, however. The USDA averaged annual minimum temperatures over a 30-year span, from 1976 to 2005, but winters have warmed significantly over that period. Zones now average about 2 degrees Fahrenheit warmer than the USDA’s 30-year average.

His analysis also showed that the country is changing unevenly; more warming is occurring over the eastern interior and less in the Southwest.

Professor Krakauer’s technique will allow gardeners and farmers to reassess more frequently what will survive the next year’s winter. “The idea is that you could use this method to keep updating the zone map year by year instead of waiting for the official map – just keep adding new data and recalculate.”

He noted that similar analyses could distinguish long-lasting climate trends – in wind or rainfall, for example – from year-to-year weather variations to distinguish between what some are calling the recent “weird weather" and the natural variations in global weather.

The National Oceanic and Atmospheric Administration (NOAA) supported this study.

Professor Krakauer studies the Earth's water and carbon cycles at the Grove School of Engineering at The City College of New York, particularly the effects of global warming and other human impacts.