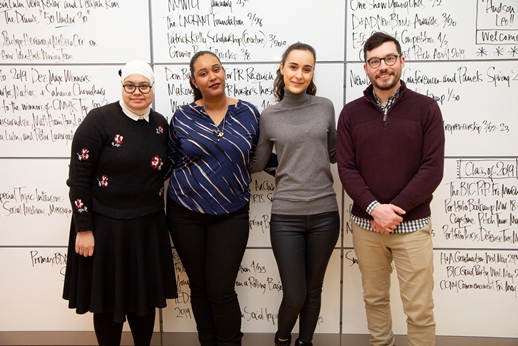 Five students from the Master’s Program in Branding + Integrated Communications (BIC) in the Division of Humanities and the Arts at The City College of New York are winners of CMYK’s “Top New Creatives 58” competition. The online design competition is open to aspiring art directors, copywriters, designers, illustrators and photographers.

CMYK magazine has recognized top student design work since 1996. After a brief hiatus, they reemerged in 2018 with their 58th issue, which recognized 70 winners and 100 projects in its “Top New Creatives 58.” Winners hailed from 29 schools, including Rhode Island School of Design, Cal Arts, and Kent State; six winners were from CCNY.

The BIC students and their projects are:

“We're not only proud that our work will be featured among inspiring artists across the globe, but we want to thank our instructors Cassondra Bazelow '16 and Caroline Monday who gave us direction and valuable feedback,” said Maisuradze about her Creative Concept course professors.

Santana was guided by Professor Gerardo Blumenkrantz in BIC’s Creative Round Robin course where her campaign was seeded during a “brief and critique” at global marketing and technology agency Digitas. Lulu and Lavergata’s campaign was developed in BIC’s Multi-Media course taught by Vera Keiter ’15 and Delilah Kim.