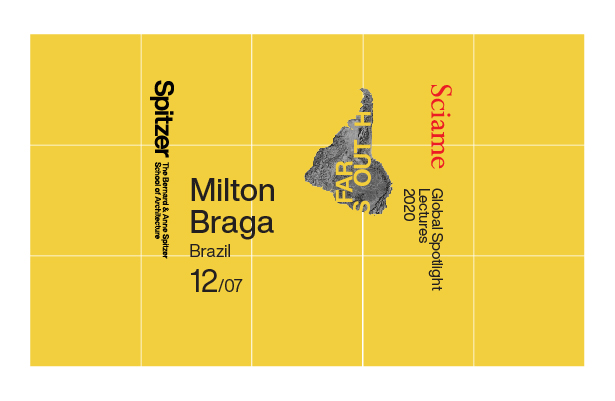 Please join us for the new SCIAME Global Spotlight Lecture Series, titled Far South. Curated by Associate Professor Fabian Llonch the series features prominent architects from South America who will discuss their work and the unique political and environmental challenges they face. The final lecture of this series, "Urban discussions in South America: MMBB’s experience," will be presented by  //www.mmbb@mmbb.com.br /" rel="noopener noreferrer">Milton Braga (@mmbb_arquitetos).

To join the event, please follow the Zoom link here.

Milton Braga studied at the Faculty of Architecture and Urbanism at the Univerity of Sao Paulo (FAUUSP), Brazil, receiving three degrees -  his undergraduate degree in 1986, his Masters in 1999 and a PhD in 2006. He has been teaching at the FAUUSP since 2001 and was Visiting Professor at the University of Florida in 2008.

Braga is the author of O concurso de Brasília: sete projetos para uma capital (2010), a book on the Brasilia competition, which was awarded second place by the 53 º Jabuti Award (the most prestigious prize in Brazilian literature) in the Architecture and Urbanism category in 2011; and won the first prize in the book category of the VIII Ibero American Architecture and Urbanism Bienalle in Cadiz, 2012.

Milton is a founding partner of MMBB Arquitetos. Since its inception in 1991, MMBB has grown in notoriety, earning well-deserved recognition through numerous awards and exhibitions. It received the first prize in the national competition for the Brazilian Pavilion in the coming 2020 Dubai Expo. Its Jardim Edite Social Housing Complex won awards in 2014 at the IX Biennial Iberoamericana de Arquitetctura y Urbanism, in Rosario, Argentina. MMBB also won the Best Entry Award for its Watery Voids proposal in the 3rd International Architecture Biennale of Rotterdam, 2007, and won several prizes in various editions of the International Architecture Biennale of São Paulo.