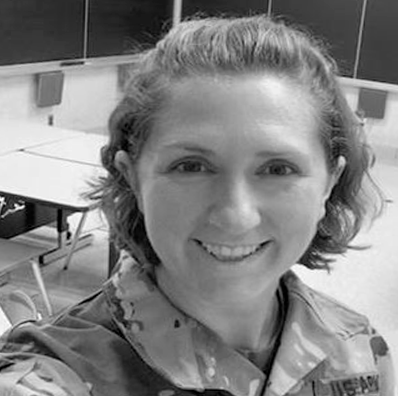 Elizabeth chose to come to City College after being selected in 2016 to become an instructor at the United States Military Academy (West Point), requiring a graduate level degree in Mathematics or Economics. While in the program, she focused on Finance and Data Analytics as her future assignment was to be a math instructor and fell in love with the program and opportunities the Colin Powell School provided. She is currently teaching “Math Modeling and Introduction to Calculus” to the freshmen class at West Point.

Elizabeth obtained her Bachelor of Science from the United States Naval Academy in 2010 when she cross-commissioned in the United States Army as a Military Intelligence 2nd Lieutenant. In her 9 years of service so far, she has been stationed at Fort Carson, Colorado, Fort Huachuca, AZ, Fort Drum, NY, and has deployed to Afghanistan in support of Operation Enduring Freedom. She has worked at multiple levels, from a Platoon Leader all the way up to the Brigade Intelligence Officer.

While at City College, Elizabeth enjoyed the diverse backgrounds, experience levels, and ages of those in the program, learning as much from her classmates as from her instructors. As Diversity and Inclusion is a topic close to her heart being a female in a male dominated profession, Elizabeth dedicated her focus for her thesis on the effects that personal attributes of cadets at West Point have on their likelihood to graduate. With a combination of both empirical research/statistical analysis of current data and exploring the complexities of building a large scale agent based simulation of the cadet and faculty population at West Point, she was able to discover some interesting potential trends for groups at risk and plans on continuing her research while at West Point to determine future policy changes to better support those groups and ensure the success of as many cadets as possible as they enter the Army.

Elizabeth credits her success at City College to the professionalism and availability of her instructors and faculty members, and enjoyed being able to seek their advice while working on her projects and thesis. The smaller class sizes and professional expertise of her instructors set apart City College from most other universities on top of more convenient class times for working adults. She took the opportunity to also mentor and tutor undergraduate students, including being a Teaching Assistant one summer for a Corporate Finance course. She hopes to continue her educational relationship with the Colin Powell school through joint research, conferences, and speaking opportunities while assigned just up the Hudson River from CCNY.