Ellianna and Elaine are CCNY’s 2017 Valedictorian and Salutatorian 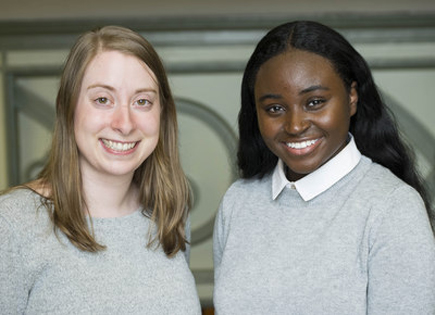 Ellianna Schwab, the first of her siblings to attend college and a recent NSF Graduate Research Fellowship recipient, is The City College of New York’s Class of 2017 Valedictorian. Elaine Johnson, born and raised in Harlem of Jamaican immigrant parents, will be the Salutatorian at CCNY’s 171st Commencement Exercises on June 2.

Ellianna Schwab
The upper Manhattan resident is graduating from the Macaulay Honors College at CCNY with research honors in physics and a 3.9 GPA. Schwab, who is receiving a BS degree, has been accepted to top-ranked astrophysics PhD programs, including Columbia University and UC Berkeley.

Elaine Johnson
Like her 2016 predecessor as Salutatorian, Orubba Almansouri, Johnson is a SEEK student graduating with distinction. She has completed a BA in CCNY’s Psychology Honors Program with a 3.9 GPA.

She will be doing research on the development of resilience in youth at the University of Cambridge in England before pursuing a PhD in clinical psychology.