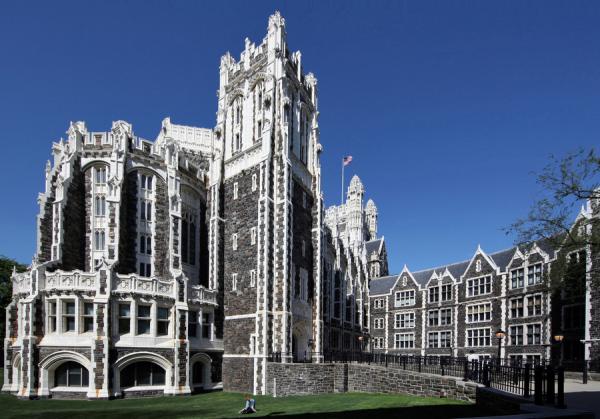 City College of New York’s Shepard Hall, a gothic revival masterpiece designed by the legendary George Browne Post more than a century ago, is the winner of a Lucy G. Moses Preservation Award from the New York Landmarks Conservancy.

This is the second Moses Award for restoration work on the 111-year-old Harlem edifice, a national landmark. In 1997, The Great Hall, located on the second floor of Shepard Hall, received the honor.

“The honor of interacting with this historic and architectural landmark has, in itself, been a post-graduate education,” said Stein.

CCNY President Vince Boudreau hailed the award. “Shepard Hall is the spiritual center of City College and the very first building erected on our campus,” he said. “It is also one of the architectural embodiments of the sacred nature of public education. It is deeply gratifying that a building that has had so much meaning to generations of City College students, faculty and staff has received this attention. We are deeply grateful for the honor.”

The coveted Moses Awards are the Conservancy’s highest honors for excellence in preservation. They are named for Lucy G. Moses, a dedicated New Yorker whose generosity benefited the City for more than 50 years. The Awards have recognized individuals, organizations, and building owners for their extraordinary contributions to the City.

“The Conservancy is grateful for the generous support of the Henry and Lucy Moses Fund, which makes the Awards possible,” said Andrea Goldwyn, its director of public policy.

This year marks the 28th anniversary of the awards. They will be presented May 8 at the historic St. Bartholomew's Church – a 2018 Moses Award recipient as well – in mid-Manhattan.

About the New York Landmarks Conservancy
The New York Landmarks Conservancy has led the effort to preserve and protect New York City’s architectural legacy for 45 years.  Since its founding, the Conservancy has loaned and granted more than $40 million, which has leveraged more than $1 billion in some 2,000 restoration projects throughout New York, revitalizing communities, providing economic stimulus and supporting local jobs. The Conservancy’s work across the City and State protects New York’s distinctive architectural heritage for residents and visitors alike today, and for future generations