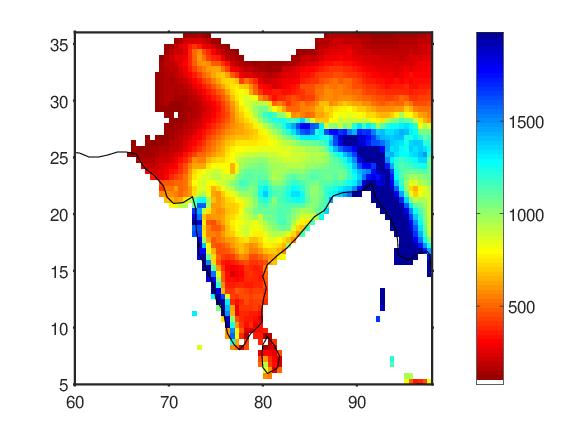 Mean monsoon-season (June-September) precipitation (mm) for South Asia, 1901-2016. Land grid cells where this was under 100 mm are left unshaded and were not included in the study domain.

With average precipitation of 35 inches per four-month season over an area encompassing most of the Indian subcontinent, the South Asia summer monsoon is intense, only partly understood, and notoriously difficult to predict. Until now, according to findings by Nir Y. Krakauer, a City College of New York civil engineer.

Because of the monsoon’s enormous impact on these sectors, his research is of importance to a range of activities, including agriculture, industry, fishing and hydropower.

A frequent visitor to the region, stretching from Nepal to Sri Lanka, Krakauer has devised a methodology that allows forecasts potentially up to a year in advance. Currently, most predictions are made about two months in advance of the South Asia monsoon season that runs from June to September, but it is not known how far ahead skillful forecasts might be possible.

“People usually use one or two predictors for forecasts,” said the Grove School of Engineering associate professor who is also affiliated with the CCNY-based NOAA-CREST. “Many of these predictors are one or another pattern of sea surface temperatures. My question was how do you find which patterns are important for forecasting the monsoon – the amount of rain and where it will be?”

“What I found is that two methods seem to do a good job of forecasting the monsoon. I looked at the sea surface temperatures at the beginning of the monsoon, and going back as far as four years before.”

His finding was that, generally, the closer to the beginning of the monsoon season, the more accurate forecasts that are based on sea surface temperature can be. But predictions with some accuracy can be made as far as a year in advance.

Getting a better sense of how much water will be available is particularly important given that the rainfall is getting more intense in South Asia while the total amount remains constant, meaning that more rain is falling in a shorter period. This could be problematic for farmers in the region.

His work in South Asia has been partly supported by USAID, most recently as part of the US-Pakistan Center for Advanced Studies on Water program.