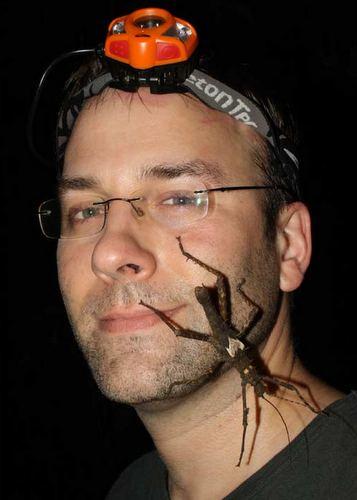 CCNY entomologist and Professor of Biology David Lohman has three species named after him.

Introducing Themira lohmanus, a fly like no other, and the most recently discovered species in the popular Manhattan urban oasis of Central Park! The immature insects subsist on duck droppings, and have a strong CCNY connection: Themira lohmanus is named after City College of New York entomologist, and Professor of Biology, David Lohman.

But wait! It’s not the only species that gets its moniker from the well-traveled entomologist, who’s often to be found in tropical forests of Southeast Asia studying the ecology and evolution of insects.  There’s also Chimaeragathis lohmani, a wasp found in Thailand, and Bulbophyllum davidlohmanii, a soon-to-be-published orchid species found on the Philippine island of Mindanao.

“It’s not terribly novel to have species named after oneself,” shrugs Lohman, citing CCNY Division of Science colleague Amy Berkov, who has multiple beetles named after her. “But new species are not discovered in Central Park very often, so having a New York City-endemic species named after me is rather novel.”

Yuchen Ang, an evolutionary biologist at the National University of Singapore where the first specimens of Themira lohmanus were analyzed, describes it thus:

“A very particular fly, Themira lohmanus has been found hiding under the noses of New Yorkers all this while. First found off Harlem Meer in Central Park, [it] can only breed on duck dung.”

Ang describes the fly’s mating ritual as “kinky” with the male employing unusual methods and appendages. It concludes with the female storing sperm from many suitors and deciding whose sperm to use when she lays her eggs.

Themira lohmanus has subsequently been found in Brooklyn’s Prospect Park.