Sonic Hedgehog at the center of Parkinson’s research at CCNY 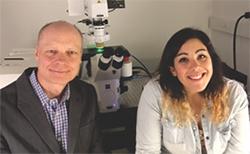 You may know Sonic Hedgehog as a Sega videogame character who saves us all from world domination. But within the realm of science, Sonic Hedgehog (SHH) is also helping to solve the mysteries of Parkinson’s Disease.

Just ask Andreas Kottmann of The CUNY School of Medicine at The City College of New York. Kottmann and his team were recently awarded a research grant by the American Parkinson Disease Association (APDA) to validate their findings around SHH’s potential role in Parkinson’s.

Parkinson’s Disease (PD) is caused by the degeneration of a certain type of neuron in the brain, so called dopamine neurons. Kottmann and his team have found that dopamine neurons do not only communicate with other neurons with the chemical dopamine as their name wrongly suggests, but also by secreting Sonic Hedgehog (SHH).

Using genetic engineering, the scientists produced a line of mice with dopamine neurons that cannot express SHH. These mice grow up healthy but then develop deficits that are reminiscent of Parkinson’s disease. Interestingly, at first, the deficits of these mice can be reduced by the drug L-Dopa, which is the most effective anti PD drug, But, like in humans, when chronically dosed with L-Dopa, the mice exhibit dyskinesia (involuntary movement).

The new grant will allow the team to determine whether agonists of the SHH co-receptor Smoothened can ameliorate established L-Dopa Induced Dyskinesia (LID) not just in mice but in Parkinsonian Macaques. What they learn might open the door for testing Smoothened agonists as anti-dyskinetic agents in clinical trials...

Since 1847, The City College of New York has provided low-cost, high-quality education for New Yorkers in a wide variety of disciplines. Today more than 16,000 students pursue undergraduate and graduate degrees in eight professional schools and divisions, driven by significant funded research, creativity and scholarship. Now celebrating its 170th anniversary, CCNY is as diverse, dynamic and visionary as New York City itself. View CCNY Media Kit.