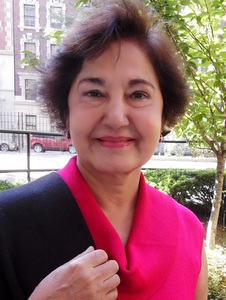 Susham Bedi, the Indian-born novelist, actress and academic, is the next Presidential Conversations speaker at CCNY.

Over the centuries, generations of Indians have emigrated to parts of the globe as distant as Fiji, Trindidad and Guyana. Yet the big theme in Indian Diaspora literature over the years has been their original home, according to Susham Bedi, the Indian-born novelist, actress and academic.

“Indians are rebuilding their Indian homes everywhere they go,” said Bedi. “Their tradition, value systems, social customs, rituals and even taboos get implanted with them. Indians have kept their culture even after more than hundreds of years of immigration.”

Reflecting on her own experience, Bedi noted that it was many years after she left India that she developed vivid memories of her family home there. “Now that I was away from home, I kind of felt an attachment to that home and there I was recasting it in my very first novel ‘Havan.’  I was making it alive or reliving it,” said the author of numerous novels and short stories.

Bedi, who is an adjunct assistant professor of modern and classical languages at The City College of New York, focuses on this phenomena in Indian literature in a talk October 20 at City College. She’s the latest speaker in the Presidential Conversations: Activism, Scholarship, and Engagement series there.  Her talk, “Recasting the Home in the World: Diasporic Indian Literature,” starts 4 p.m. in the Bernard and Anne Spitzer School of Architecture’s Sciame Auditorium. It is free and open to the public.