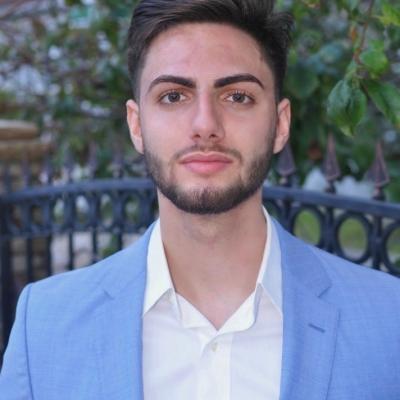 Kenneth Levy loved playing basketball and he was really good at it too. So good in fact that he received scholarship offers to play at the collegiate level. But while people saw his skills and talents on the court, they did not see the medical conditions that affected his muscles, joints, and bones. It turned out that Levy had been diagnosed with osteopenia and Osgood-Schlatter disease since his childhood, which impeded his ability to pursue his basketball goals.

Through the pain and frequent doctors’ visits, Levy says he saw a silver lining that led him to his current academic path. “I developed a profound sense of appreciation for orthopedics because of its ability to restore the mobility and functionality that is necessary for our everyday activities,” he said. “It is frequently taken for granted until it is lost.” Levy decided to attend the Sophie Davis School of Biomedical Education at City College, where he is studying medicine, and plans to specialize in orthopedics.

Levy’s mission, which flows directly from his experience, is to help others overcome the physical limits that may hinder them from pursuing their life goals. So far, he is on the right course. His strong academic performance earned him an invitation to the S Jay Levy Fellowship for Future Leaders, made possible through the generosity of the late S Jay Levy ’42 (no relation to Kenneth Levy) through the Jerome Levy Foundation. As part of the program, fellows go through a structured, year-long professional development program that peaks in a 280-hour summer internship. They receive training, build their networks, enjoy mentorships, and get a stipend towards unpaid summer internships.

“As a young college student eager to expand upon my academic involvement outside of school, I viewed the fellowship as a golden opportunity to expand my network both within, and outside campus,” Levy explained. Before applying, he recalled hearing positive feedback from alumni of the program who told him that the Fellowship would “allow me to develop myself from a student to a professional.”

Asked about his favorite aspect of the fellowship, Levy was quick to underline the connections he built, crediting the Fellowship with introducing him to “many of my ambitious peers outside of my program and… many professionals within the medical field.” He worked closely with the fellowship’s team to develop his resume; and was consistently given insights by his advisor, Dr. Ariel Brandwein, on options available to him as a medical student and future researcher.

Last summer, Levy got a taste of one of his career goals as he interned within the Orthopedic Laboratory at SUNY Downstate Medical Center. The turbulence caused by the coronavirus pandemic provided an opportunity for Levy. “There were far less students in the lab due to COVID-19, which opened a window for me to take on a much larger role and even spearhead several projects,” he said. Levy capably took advantage. He did clinical, biomechanical, and translational research; collected data, did tests, prepared specimens, and performed analysis. He wrote, edited, formatted, and submitted abstracts, posters, and manuscripts to several orthopedic conferences and journals, many of which were accepted to be presented as posters at upcoming conferences including the American Academy of Orthopedic Surgeons and the American Association for Hand Surgery.

Always mindful of the reason he chose this path, Levy says the projects he enjoyed the most during his internship were the biomechanical ones because he could “directly visualize the impact of our findings on restoring patient functionality.”

This upcoming spring, Levy would complete the undergraduate portion of his combined BS/MD program at the Sophie Davis School of Biomedical Education/CUNY School of Medicine (CSOM). He intends to pursue an orthopedic surgery residency after medical school, while also involved in academia and clinical research. With his tenacity, track record and training, there is no betting against him.