Free and open to the public. Photo ID required to enter building.

In 2015 & 2016, South Africa was rocked by two widespread student protest movements, #RhodesMustFall and #FeesMustFall, which brought tertiary education across the country to its knees. One unintended consequence of the anger directed at universities for their failures to address issues of race, class and privilege in meaningful ways was the space that was opened up in many disciplines to question and interrogate the inherited Western canon and its relevance to a rapidly changing and changed world. In architecture, the introduction of a transformative pedagogy capable of taking on such issues has brought questions of inter-, cross- and multidisciplinary practice and thinking to the fore. Prof Lokko's 30-minute talk will combine video, documentary footage and student work from her tenure as the Director of the Graduate School of Architecture at the University of Johannesburg, drawing parallels between South Africa and the US in light of her ambitions for CCNY's Spitzer School of Architecture.

LESLEY LOKKO is an architect, academic and the author of eleven best-selling novels. She is currently the Dean at The Bernard and Anne Spitzer School of Architecture at The City College of New York. Before arriving at CCNY, she served as the Head of School at the Graduate School of Architecture, University of Johannesburg, South Africa.  She is the editor of White Papers, Black Marks: Race, Culture, Architecture (University of Minnesota Press, 2000); editor-in-chief of FOLIO: Journal of Contemporary African Architecture and is on the editorial board of ARQ (Cambridge). In 2004, she made the successful transition from academic to novelist with the publication of her first novel, Sundowners (Orion 2004), a UK-Guardian top forty best-seller, and has since then followed with ten further best-sellers, which have been translated into fifteen languages.

SUSANNA SCHALLER is an Assistant Professor in Urban Studies and Planning in the Division of Interdisciplinary Studies at the Center for Worker Education. She earned her PhD in City and Regional Planning and is a certified urban planner. Her work focuses on urban governance, zoning, the politics of commercial district “revitalization” and small business development. She examines processes of urban restructuring and place making through public-private partnership regimes and explores the intersection of ethnicity, race and class in urban planning discourses and the construction of “ideologies place. ” Her book Business Improvement Districts and the Contradictions of Placemaking: BID Urbanism in Washington, D.C. was recently published by the University of Georgia Press. 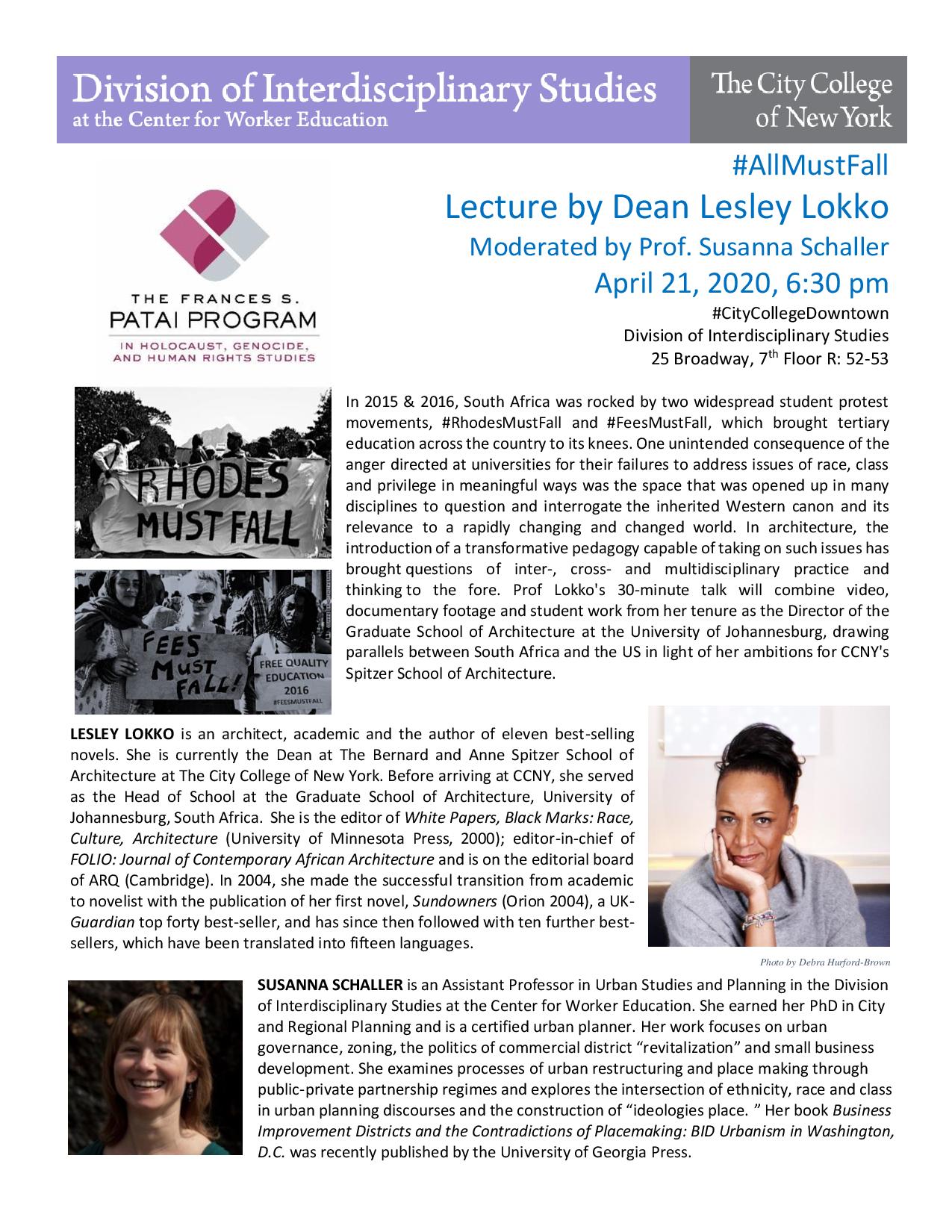 Back to Departmental Calendar Back to calendar of events