In memory of Earl "Bud" Rovit 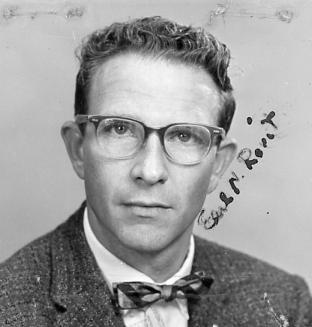 The English Department mourns the death of former faculty member Professor Earl "Bud" Rovit, who taught American Literature and Creative Writing for thirty years at City College. Among his nine books is an acclaimed study of Hemingway, but he was also widely respected for his pioneering work on the Jewish American literary tradition. We extend our condolences to his family, and express our gratitude for his devoted work as a teacher, scholar, and colleague.

Professor of English and Department Chair

Earl H. Rovit, a leading literary scholar of the writing of Ernest Hemingway, Ralph Ellison, Saul Bellow and William Faulkner, and in the early 1960’s, one of the first to discern and explore what became known as the Jewish American literary tradition, including writers such as Bellow, Bernard Malamud, Norman Mailer and Philip Roth, died April 16 in New York City. He was 90.

Rovit was a Professor of American Literature at the City College of New York from 1966 to his retirement in 1996.  Over the course of a career that began in 1955, he was the recipient of Guggenheim and National Endowment for the Humanities Fellowships, and four Fulbright Professorships (Germany, France, China and India).

He published Ernest Hemingway in 1963 and it was translated into 12 languages.  A revised edition in collaboration with Gerry Brenner was released in 1986.

In addition to six books of literary criticism and over sixty journal articles, essays and literary criticism for publications including The Sewanee Review, the Yale Review, and the Southern Review, he was the author of three critically acclaimed novels: The Player King, A Far Cry, and Crossings.

Peter Collier, writing in the New York Times Book Review in 1967, said “A Far Cry is both deft and audacious. Rovit, demonstrating a respect for traditional craftmanship, endows each of the narratives with its own suspense and catharsis.”

Crossings, published in 1973 was a novel in the form of two journals, a husband’s and a wife’s, bound back to back.  Readers could choose to explore the events of a single day by starting with either journal.   “…[N]ot only does it develop a complex historical theme, but beneath its glittering surface are the enduring rhythms of literature, and of myth…”, wrote Mark Taylor in Commonweal.

Earl, known to friends as Bud, was born May 26, 1927 in Brookline, MA to Samuel Rovit, a truck driver, and the former Frances ‘Jenny’ Ehrenberg.  He was educated at the Boston Latin School, and attended the University of Michigan before leaving to serve in the U.S. Army in Korea.  He later finished his degree at Michigan, and received his MA and PhD at Boston University.

In addition to his teaching, writing and family, he was most proud of having completed two New York Marathons in his 50’s.

His only sibling, Dr. Richard L. Rovit, former Chief of Neurosurgery at St. Vincent’s Hospital in NYC, preceded him in death by one week.  He is survived by his wife, Honey; three children, Sam, Rebecca and Peter; and six grandchildren.