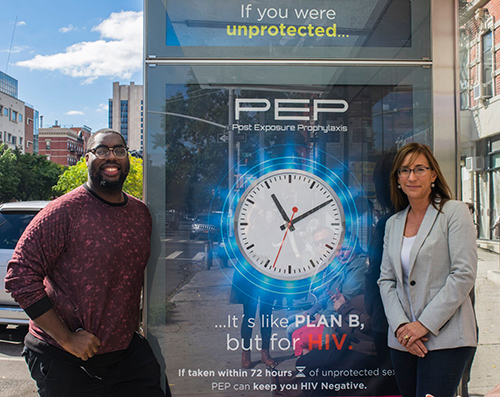 Researchers from the CUNY School of Medicine at The City College of New York are making strides in HIV prevention with the launch of their bus shelter ad campaign “PEPTALK” in Upper Manhattan and the Bronx. The campaign focuses on increasing awareness and access to Post-Exposure Prophylaxis (PEP), a medication that prevents HIV infection if taken within 72-hours of exposure to the virus and consistently for 28 days.

The campaign is part of a two-year NIH-funded research study, which was awarded to Dr. Victoria Frye, principal investigator and associate medical professor at the CUNY School of Medicine at CCNY. The R21 grant from the National Institute of Allergy and Infectious Diseases is designed to develop and evaluate a campaign to increase access to and uptake of PEP among people living in high HIV prevalence areas and minority communities. The campaign is a collaboration between the CUNY School of Medicine and The Oval Center of Montefiore Medical Center.

“This kind of ad campaign is needed; one thing that is pretty consistent is that most community residents, even younger people - students in my classes, don’t know about PEP,” said Frye. “PEP is effective and has been used for decades by medical professionals to prevent infections after needle sticks. Now, it is one more tool we can use to prevent HIV.”

The ads are designed to drive demand for PEP, evaluating both the effectiveness of the campaign and a brief behavioral intervention to increase clinical care engagement among PEP patients, gay men of color in particular. They were designed after a significant formative research phase was conducted with in-depth interviews and focus groups led by Jeremy Fagan, project director of PEPTALK, and Barry Zingman, co-principal investigator at Albert Einstein College of Medicine and medical director of the AIDS Center at Montefiore.

On Friday, October 19 at 11 a.m., Frye and her colleagues will gather at 132nd street and Adam Clayton Powell Jr. Boulevard to engage with the community about PEP and unveil the new bus shelter ad campaign.