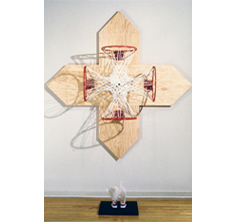 Colin Chase is a sculptor who uses a variety of materials and devices to encourage contemplation. Ideas, forms, textures, synergistically juxtaposed and nestled in incongruent combinations which challenge formal spatial logic, as well as quick intellectual responses. He is represented by June Kelly Gallery in New York. His work has been included in one person and group exhibitions in several galleries including Jamaica Arts Center, Socrates Sculpture Park, The Studio Museum in Harlem, and the Neuberger Museum of Art. He is a former resident of the Institute for Contemporary Art, P.S. 1 Museum and Longwood Studios. He received public commissions from the Queens Hospital and the Malcolm X Memorial.