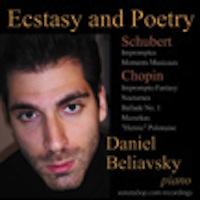 Daniel Beliavsky, Ph.D., is a concert pianist, music theorist, composer, filmmaker, and educator.  He has performed in Europe and throughout the United States with both orchestra and in recital, and produces music documentaries through his production company, Opus1films (opus1films.com).  In 2011, Daniel produced a film documentary about the distinguished American composer Donald Harris’s opus 1, the Sonata (1957) for piano, and about Harris’s early career in Paris.  As part of that film, Daniel completed the first commercial recording of this sonata since Veronica Jochum’s 1971 release.  Also in 2011, Daniel recorded David Del Tredici’s Fantasy Pieces (1960), the first of several works he has recorded for a film he is producing about Del Tredici and his music.

Daniel’s commercial CD releases include The Complete Works for Solo Piano of Lukas Foss (Sonatabop.com label), a world-premiere recording completed in honor of composer Lukas Foss’s 80th birthday in 2002.  In 2004, Daniel released two additional recordings on this same label:  From Italy to Russia, whichincludes works by Domenico Scarlatti, J.S. Bach, and Modest Mussorgsky, and Ecstasy and Poetry, which features multiple pieces by Franz Schubert and Frédéric Chopin.  John France, of Musicweb-International (UK), noted several first-rate performances on Ecstasy and Poetry, writing, “Could Beliavsky have set a benchmark for all interpretations of the SchubertImpromptu in G-flat?”  These recordings have been broadcast throughout the United States on such radio programs as David Dubal’s “Reflections from the Keyboard:  The Piano in Comparative Performance.”

Daniel has appeared on radio, film, and television, and his performances and recordings have been reviewed by the American Record Guide, the Milwaukee Journal-Sentinel, the Topeka Capital-Journal, Musicweb-International, Musical Pointers, Sequenza21.com, the New Yorker Magazine, and the New York Times.  He is on the honorary board of the PianoArts International Competition and Music Festival, and is among a select group of Steinway Artists who areSteinway Supporting Personalities.  A graduate of Columbia and New York University, Daniel resides in New York City, where he is a visiting professor of music theory, aesthetics, writing about music, and history at several universities, including The City College of New York.