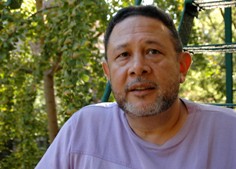 B.A. in English lit, University of South Florida, is a Distinguished Lecturer in the Department of Foreign Languages and Literature. Jaime Manrique was born in Colombia. He is a bilingual writer who has published five novels, four volumes of poetry, one memoir, one volume of film criticism, two volumes of poetry translations, and co-edited an anthology of Gay Latino writers. His work has been translated into 15 languages. He received a John Simon Guggenheim fellowship in non-fiction. A former associate professor in the MFA in Writing at Columbia University, he has also taught at Mount Holyoke College, and in the MFA programs in writing at Long Island University and Rutgers University, among other institutions. His novel, Cervantes Street (which was translated into Spanish, Chinese, Turkish and German)was published in 2012.  El libro de los muertos (Poemas selectos 1973-2015) was published by Artepoética Press in New York in 2016. Editorial Pontificia Universidad Javeriana in Bogotá, Colombia, will publish in May 2017 the volume of poems El fantasma de la memoria. Mr. Manrique has just completed a new novel, Like This Afternoon Forever, which will be published in Spanish translation by Planeta Editorial in Bogotá, Colombia in 2017.