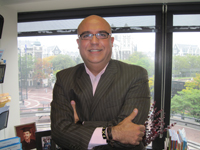 Jesús Fraga came to The City College of New York (CCNY) in September 2008 with 22 years of experience in teaching and school leadership!  Prior to coming to CCNY, he was the K-12 Director of World Languages and English Language Learner (ELL) Programs for Long Beach Public Schools, Long Island, NY.  From 2003-06, he was the Director of Dual Language Programs for the New York City Department of Education, where he provided leadership, staff, and program development to nearly 70 Dual Language programs/schools citywide.  During his tenure in that position, dual language programs grew; new program offerings opened in Chinese, Haitian, Korean, and Russian, and the annual NYC DoE Dual Language Symposiums were created for all schools citywide.

Mr. Fraga has a BS in Bilingual Education from City College, CUNY (1986), an MA in Elementary Education from Adelphi University (1988), and an MS in Educational Leadership from Bank Street College (2000).  With the American Field Service (AFS), he participated in a special project on improving education in Peru, where he also took courses in Spanish and Latin American Studies at the University of Arequipa (Peru).  In addition, he has taken professional coursework in Multicultural Education (Fordham University), International Education, Bilingual Education, and Latin American Studies (New York University), and Educational Technology (NY Institute of Technology).  During the 2002-03 school year, he was granted a study/travel sabbatical from the NYC Department of Education, where he improved his skills in Computer Education and traveled extensively through South America and Southeast Asia, giving him a deeper understanding of bilingualism in the developing world.

Currently, with over 30 years of experience, Mr. Fraga's pedagogical background includes elementary and middle school teaching in various New York City schools and districts, and supervision and administration of ELL programs (K-12) at the school, district, and citywide level, as well as urban and suburban experience.  In 1998, he was invited by Miami-Dade Public Schools to provide professional development to bilingual teachers and administrators. In 2005, he was invited by the Department of Education of Chile to present on the benefits of dual language and second language education to teachers and school leaders in Santiago.  In 2007, he was selected to be the keynote speaker of the annual Desfile de la Hispanidad de Nueva York 2007 Gala Dinner, a presentation that celebrated the value of bilingualism for all.

During the 2009-10 school year, Prof. Fraga, in collaboration with other department faculty, conducted two "Nuts and Bolts Workshops – Surviving Your 1st Year Teaching," especially created to support teacher candidates during their first months in the classroom. That same year, he also consulted for Bilingual/ELL programs in Yonkers Public Schools.  In 2009, he participated in a museum partnership between EDCE 6400C and the American Museum of Natural History.  Furthermore in 2009, he joined the college's partnership program with the Lincoln Center Institute, and he became a member of the advisory committee of the Paulo Freire School, a new K-8 dual language school, which opened in September 2010 in New York City.

In August 2010, Prof. Fraga became program director of the Programs in Bilingual Education and Teaching English to Speakers of Other Languages (TESOL), a large and complex program with undergraduates and graduates, certification and non-certification streams, NYC Teaching Fellows and Subsidized students, as well as local and international students.  He held this role for four years.

In 2011-12, he was served as a consultant for Bilingual/ELL programs for Southampton Public Schools.  In spring 2011, co-chaired the CCNY Immigration and Education Conference, an event that consisted of over 500 participants.  Furthermore, in January 2012, along with two other program colleagues, Prof. Fraga provided the English as a second language program evaluation of a bilingual school in San Salvador, Republic of El Salvador, Central America.

During the 2014-15 school year, Prof Fraga became the Program Manager for the Subsidized Bilingual Program and the NYC Teaching Fellows Program at CCNY, a special partnership between the DoE and the college.  In fall 2014, he was invited to create an ELL Parent Involvement Plan with district Social Workers in Mineola Public Schools, Long Island, NY.  In addition, in fall 2014, he provided bilingual professional development services to a bilingual school in Santo Domingo, Dominican Republic.  Furthermore, throughout 2014-15 and as community service to New York’s multilingual and multicultural community, Prof Fraga collaborated with the Turkish Cultural Center of Queens to provide a series of educational workshops for Turkish speaking parents and the Turkish immigrant community of NYC.

During 2015-16 academic year, Prof Fraga was granted a sabbatical, where he spent twelve months in Turkey and took the opportunity to travel to countries in the nearby region.  As part of his main activities during this time, he taught ENL and Spanish at the School of Foreign Languages of Gediz University, Izmir, in the Turkish Aegean Region.  He was also invited to co-present at the Turkish ESL Conference in Ankara (November 2015) and the TESOL Arabia Conference in Dubai, UAE (March 2016).

In addition, Prof. Fraga is proud to provide service to the college/university by being a member (or past member) of the following committees:

Throughout the years, Mr. Fraga has participated in numerous College Recruitment Fairs and Faculty Search Committees at CCNY. Because of his great passion for the world, its languages and multiculturalism, he is also fully bilingual (English/Spanish), has basic knowledge of French and Turkish, and intermediate knowledge of Portuguese.  He has traveled to 91 countries in six continents with a personal goal of 100 in the very near future.  Prof. Fraga is a product of public education and a strong advocate for its success!

Furthermore, he has supervised graduate and undergraduate bilingual and bilingual special education student teachers in numerous schools throughout the city.