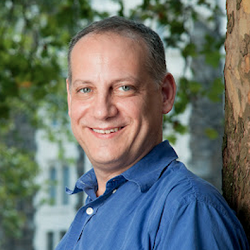 Michael D. Grossberg is an Associate Professor of Computer Science at City College, City University of New York. He works applying machine learning and visualization techniques to science problems, particularly in problems in medical imaging, remote sensing, and climate data analysis. He works with collaborators at the NOAA-CREST center and Memorial-Sloan Kettering Cancer Center. Before coming to CCNY, he spent four years as a Research Scientist with the Columbia Automated Vision Environment (CAVE), at Columbia University. He received his PhD in Mathematics from the Massachusetts Institute of Technology in 1991. His research in computer vision has included topics in the geometric and photometric modeling of cameras, and analyzing features for indexing. Dr. Grossberg was a Lecturer in the Computer Science Department at Columbia University. He was also a Ritt Assistant Professor of Mathematics at Columbia University. He has held postdoctoral fellowships at the Max Plank Institute for Mathematics in Bonn, and Hebrew University in Jerusalem. He has authored and coauthored papers that have appeared in ICCV, ECCV, CVPR. He has filed several U.S. and international patents for inventions related to computer vision.

BA. U of Pennsylvania