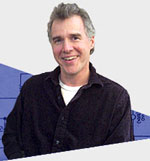 Professor Kozel is an audio engineer, composer (of television theme music) and arranger who also acts as a consultant for audio, video, and acoustic design projects, such as the Great Hall at the College and recording studios around the country. He was also a consultant and designer for several CD-ROMs on the subject of audio technology training. Since 1989 he has designed, implemented, and helped maintain the studios and labs of the Sonic Arts Center facility at the College, as well as the entire curriculum of the program, consisting of 11 new courses.