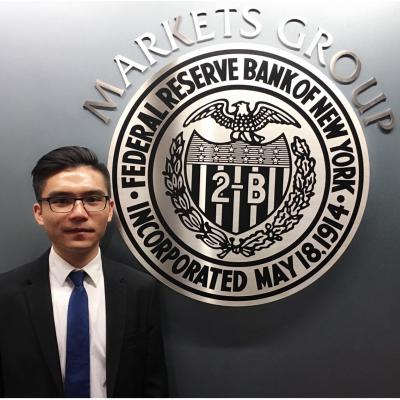 JianBin Chen –a 2018-2019 S Jay Levy Fellow – aspired to become a Political Scientist while growing up. When the 2008 global financial crisis occured, he decided, in the midst of the uncertainty, fears and losses of that crisis, to become an Economic Research Analyst to “understand why things happened the way they did.” He has had a remarkable journey from those dreams to where he is today.

JianBin’s parents made a sacrifice when they decided to migrate to the United States for the promise of better education for their children. They sold off their wholesale paper company in China. His father took a job as a porter in New York City; and his mother became a babysitter. JianBin himself worked as a receptionist in a Chinese-American doctor’s clinic. In school, the young immigrant struggled but overcame the language barrier.

Despite the challenges, JianBin gained admission to the City College of New York to study Economics. He excelled academically, and his performance earned him an invitation to the S Jay Levy Fellowship for Future Leaders, made possible through the generosity of the late S Jay Levy ’42 through the Jerome Levy Foundation. Mr. Levy was a noted economist and advocate of policies to increase employment opportunities. In the selective program, fellows participate in a year-long professional development process that culminates in a 280-hour summer internship. Fellows receive professional development training and a stipend towards unpaid summer internships.

JianBin says what he found most helpful about the fellowship were the mock interviews, resume and cover letter building, the connections and various levels of support provided by the fellowship, board, mentors and staff.

Thanks to the S Jay Fellowship, which provided a stipend for his travel and accommodation, JianBin interned at the Federal Reserve Bank of New York’s office in Chicago. He described his experience in the Mortgage Market Directorate of the Bank as “extremely valuable, challenging and enjoyable.” He even had a chance to work with a team whose work dealt with issues relevant to the 2008 financial crisis. JianBin gave it his best, arriving at the office by 7a.m. daily to join in on briefings and operation calls due to the time difference between Chicago and New York. He acquired a solid understanding about how the central bank of the United States influences the domestic and overseas financial markets while developing many technical and research skills which will help him succeed in his career. At the end of the summer internship, where he worked on three important projects at the Bank, JianBin’s supervisor praised him as “diligent, motivated and productive.”

JianBin, who graduated from City College in December of 2019, now works in Harrisburg, Pennsylvania with PFM Asset Management, where he will no doubt continue to showcase the excellence that has helped him to succeed in reaching his goals all these years.