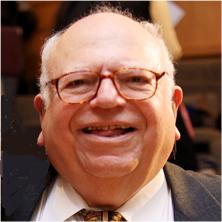 Univ. of Ulm, Univ. of Vienna

I went to the Bronx High School of Science, where I graduated in 1950, in a class

that included the two Nobel Prize winners Steven Weinberg and Sheldon Glashow. The

Myriam Sarachik, as well as other well known physicists Gary Feinberg and Morton

Sternheimer. It was a good year for physicists.

I went to MIT as an undergraduate, and wrote my thesis under Prof. Laszlo Tisza,

graduating in 1954. I went to graduate school at the Univ. of Illinois, getting a Masters degree in 1956, and my Ph. D. in 1958. However, after I passed my qualifying exams in

1956, my thesis advisor, Prof. Francis Low, moved on to MIT, so I followed him there

and spent two years writing my Ph. D. thesis at MIT, although my degree comes from

When I graduated, I had to spend two years in the US Army, to fulfill an ROTC

obligation, since they were nice enough to let me finish graduate school first. I served

most of my time at a physics research lab., officially connected to the NSA, outside of

Washington, DC, next to the U. of Maryland campus, and got to know the Maryland

faculty. (The Army trained me as a cryptanalyst, which I never dreamed could be useful

in my career. But one of the subjects I am interested in today is quantum cryptography,

so you never know.)

Then I went to Ohio State University for one year, and won an NSF post-doc.

All this time I was a high-energy theorist. I was hired by CCNY in Sept. 1964, and have

been there ever since.

But I soon changed fields, becoming interested in gravity, and thought up an

experiment to test the equivalence principle with neutrons. I went to see Prof. Cliff Shull

at MIT around 1970 to see if he could do the experiment. He thought so, but the MIT

reactor was down for two years. In the meantime, Roberto Collela, Al Overhauser, and

Sam Werner, independently thought of a better way to do the experiment and did it

beautifully, using the neutron interferometer, which was new at that time. I then started a

collaboration with Al Overhauser, and we have been good friends ever since. In 1978, I

went to a conference at Grenoble in France, where they had the world's biggest nuclear

reactor, and met Cliff Shull again, and Mike Horne, and Anton Zeilinger there. They

were all collaborating at MIT, and I started to go up there visiting them regularly, and

becoming part of their group, and we have been collaborating for 30 years. In 1980, I

spent a yearat MIT on sabbatical.

This kept up until the middle 80's when Prof. Shull retired, and MIT stopped

Anton Zeilinger moved on to the Atominstitut at the T.U. in Vienna when Prof. Shull

retired, and I went to visit him there on sabbatical with a Fulbright grant in 1986. There

we discovered the GHZ (Greenberger-Horne-Zeilinger) theorem, a much improved

version of Bell's theorem in quantum mechanics, although we did not publish it until

1989. Prof. Zeilinger moved on to Innsbruck, and started a quantum optics lab. I won a

Humboldt senior scientist award and went to Munich in 1988, to work with Prof. H.

Walther at the Max Planck Inst. in Garching.

Since this time I have been working on fundamental problems in quantum theory,

of Vienna around 1990, and I have been visiting there regularly and collaborating with

his group. Some other high points have been that a two issue festschrift was published

for me by the Journal Foundations of Physics on my 65th birthday, and a conference on

at the University of Vienna, in 2009. (Also honored was Helmut Rauch, co-inventor of

the Neutron Interferometer, on his 70th birthday,) I was elected a fellow of the American

Physical Socilety, and also a foreign member of the Austrian Academy of Sciences, the

Nobel Prize Committee in physics hired me as a consultant, and Prof.Zeilinger and I

founded the topical group on Quantum Information for the APS, which at last count had

Physics, at CCNY, a memorial chair for a very good physicist and a great teacher. In the

fall of 2011, I went on sabbatical for one semester, during which time I had a renewal of

a senior scientist award from the Humboldt Foundation, and worked for two months in

Ulm, Einstein's birthplace. The rest of the sabbatical was spent in Singapore, Oxford,

I have also organized a number of meetings on quantum mechanics, including two

large ones, one of which honored Eugene Wigner, and the other honored John Wheeler. I

am also on the editorial boards of a number of journals, and am still doing research on

Mechanics and Electricity and Magnetism

History and Philosophy of Science and Technology, I and II

History and Philosophy of Quantum Theory (with K. Irani)

First Physics Prof. to teach in the FIQWS program (English)

A. (with M. Horne and A. Zeilinger). We proved a generalization of Bell's Theorem which

is theoretically much simpler than previous work on the subject. A number of people have

exploited this work theoretically, and experimentally. The necessary states (GHZ states) have

B. Because of the expansion of our work from neutrons into optics, I have been learning

optics, notably lasers. That is the reason for my stay at the Quantum Optics laboratory in

Garching, and my last graduate student had a significant optics involvement in his thesis. The

technique, called "parametric down-conversion", is a direct analog of some work we have done

with multi-particle quantum systems, and Zeilinger's group has gotten directly involved, both

experimentally and theoretically in the subject of "entangled states".

C. I have also been involved in studying a restricted form of time-travel in quantum

theory. There is also much work on this area in general relativity, but I believe that

quantum theory itself is a natural place in which to look for such behavior, as already one

can see such phenomena as quantum teleportation.

D. I am working on a study of the relativistic effects possible with atomic and neutron

interferometers, and the differences between these techniques (with W. Schleich, and E. Rasel).


Greenberger DM A conference will be held in my honor this summer, Fundamental Questions in Quantum Theory, N/A (2009).
CCNY Authors assigned: Greenberger DM