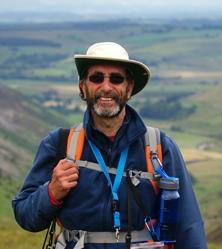 Lou Marinoff - a Commonwealth Scholar originally from Canada - studied theoretical physics at Concordia and McGill universities, and earned a PhD in Philosophy of Science at University College London. Following postdoctoral research at the Hebrew University of Jerusalem, and a lectureship at the University of British Columbia, he joined The City College of New York in 1994, where he is currently Professor of Philosophy.

Lou has appeared in three documentary films, two of which feature professional sports. A three-time Canadian Open Table Hockey champion (1978,79, 80) and US Open Champion (2015), he continues to play and promote the sport as conducive to developing attention span and sportsmanship in children: an antidote to ADHD and bullying alike. The Wall Street Journal agrees, reporting in 2012 that table hockey is making a comeback.

A full cv can be downloaded here.

2019: On Human Conflict: The Philosophical Foundations of War and Peace, Rowman & Littlefield, Lanham

2018: "A Time to Waken the Wisdom of the Middle Way," in Our World Today: Reflections from American Thinkers, edited by Masao Yokota, Ushio,Tokyo, 92-102

2016:   "All the Great Things in the World Start from the Small" in The Habit : Borrowing Life Strategies from the World’s Most Creative Leaders, edited by Douglas Huh, Yolimwon Publishing Group,    S, 102-109

2017: "Psychology is the Child of Philosophy," Interview with Montse Rovira. EC Psychology and Psychiatry, 4.1, 6-14.

2016:  "Mind Over Mind, Mind Over Brain, Man Over Man: A Convergence of Buddhism, Neuroscience, and Nietzsche," in Proceedings of 2016 Mind Humanities International Conference, , 581-608.

2014. "Biological Roots of Conflict, and Its Resolution via Cultural Evolution," in The Journal of Conflictology, forthcoming.
2011. "Theory and Practice of Philosophical Counseling," Journal of Humanities Therapy, 2, 1-17.
2011. "Commemorating Fifty Years of IOP," The Journal of Oriental Studies, Vol. 50, #2, 78.
2011: "Transforming Poison into Medicine: The Role of Dualism in Psychiatry," The World Journal of Biological Psychiatry, 12(S1), 66-69.