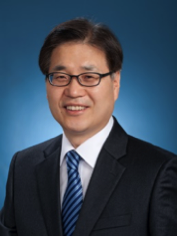 Dr. Myung J. Lee received a B.S and an MS from Seoul National University in Korea and Ph.D degree from Columbia University in electrical/electronics engineering. He is currently a professor at the Dept of Electrical & Computer Engineering and a doctoral faculty of computer science at Graduate Center of City University of New York. He is also an adjunct professor at GIST.