As a high school senior, David L.V. Bauer had his pick of colleges. He chose the institution where he conducted the research that earned him first place in the 2005 Intel Science Talent Search, The City College of New York.

At CCNY, he has had a career for which the word 'extraordinary' seems almost an understatement. He became a Rhodes Scholar last fall and picked up Goldwater and Truman Scholarships and the Macaulay Honors College Chancellor's Award along the way. A chemistry major in the Macaulay Honors College with a 3.99 G.P.A., David spent his junior year at the Wellcome Trust Centre for Human Genetics at The University of Oxford.

There, he created a computer program to analyze raw data from a new DNA sequencing approach that is used to analyze genetic changes related to cystic fibrosis and other diseases. At CCNY, he conducted organic chemistry research towards the synthesis of aspirin analogues to explore aspirin's anti-cancer properties.

"I have always been drawn towards research that has potential for public benefit," he said. "City College provided me with a nurturing environment where I not only gained a solid foundation in the sciences, but also came to see how my work impacted New York City and the world at large.

"Outside the college, he serves on the Board of Directors of the Creativity Foundation and as a United Kingdom Science and Engineering Ambassador. He also is the creator of United Liberia, a website that provides free access to Liberian media for expatriates, and webmaster for a Hungarian tourism website.

In the fall he will return to the Wellcome Trust Centre to conduct research in clinical medicine and work toward a Ph.D. from Oxford. 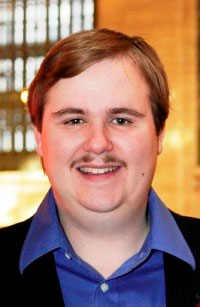 "City College provided me with a nurturing environment where I not only gained a solid foundation in the sciences, but also came to see how my work impacted New York City and the world at large."
- David L. V. Bauer