That opportunity is in the form of a scholarship to Harvard Medical School. "It is a great honor to come from City College and to represent both CCNY and CUNY at Harvard," the Flushing resident said.

A student in the Macaulay Honors College, Julian said he choose City College because of its academic reputation and diversity. He used the resources provided to Macaulay students to go beyond the textbook and the classroom.

He counseled parents in a family health intervention program run by Columbia University. He also participated in a summer undergraduate mentorship program between his junior and senior year at Albert Einstein College of Medicine.

Currently, he is using Drosophila Melanogaster, the common fruit fly, as an animal model to study autism spectrum disorders as a research assistant to Professor of Biology Tadmiri Venkatesh.

He has received myriad awards and honors including: best poster in neuroscience at both the Annual Biomedical Research Conference for Minority Students (ABRCMS), and the 2012 Collegiate Science and Technology Entry Program (CSTEP) Conference. He also received a Weston Scholarship and the 2012 Dr. Jonas E. Salk Scholarship Award, in addition to the scholarship from Harvard.

Throughout his four years at CCNY Julian kept his eye on the prize, balancing his time, "resisting third-party temptations" and staying true to himself. He attributes his success, however, to his parents, who instilled in him the drive to be the best, while leaving something tangible behind to assist others. Julian also credits the faculty at CCNY for supporting him and providing him with the skills to succeed.

Julian's goal is to become a pediatrician focused on helping people because, as he proudly proclaims, "the best thing you can do for yourself is to do something for someone else." 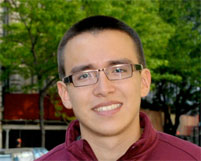 "It is a great honor to come from City College and to represent both CCNY and CUNY at Harvard."
- Julian Flores