Steven Gonzalez has mastered the art of multitasking.  By day, he serves as the assistant to the director of Affirmative Action at The City College of New York. By night, he is a student in the Division of Interdisciplinary Studies at CCNY's Center for Worker Education and a multitalented musician.

"I've incorporated what I've learned [into my music],"says Gonzalez, who has a 3.7 GPA.  "I'm writing full, concise stories, and I'm able to minimize them into a verse.  It's only because I've learned the whole story-writing process."
"He's a wonderful close reader and writer," notes English Professor Marlene Clark.

"[Steven has] effortless charisma. He is a gifted young intellectual with the goal and potential to truly make the planet rock," adds his academic advisor, Warren Orange.

Steven made his way to City College in 2004 after a brief stint of Five Towns College in Dix Hills, N.Y.  His mother, Yolanda, a Hostos Community College alumna and employee, suggested he work for and attend CUNY.

Graduate school is in his future plans, as long as his musical career doesn't take off first. Currently a lead vocalist in a hardcore salsa band "Vaya" and one of two lead vocalists for the 10-member hip-hop fusion band "Lifted," Steven sees a record deal in the immediate future. Major bookings include the Apple Store in the Willowbrook Mall, 7 p.m. Thursday, May 27, and performing for U.S. troops through the USO.

"I am close to realizing the musical dream that I've pursued all my life," he says.  "For the first time in my life I know where I'm going, rather than wondering how I'm going to get there." 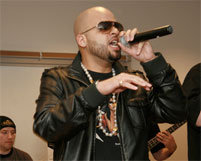 "I am close to realizing the musical dream that I've pursued all my life. For the first time in my life I know where I'm going, rather than wondering how I'm going to get there."
- Steven Gonzales