Jaeseung Hahn's life journey has already taken him around the world. Born in Pittsburgh, he was raised in South Korea and lived briefly in Belgium. When his parents returned to Korea, he moved to Ossining, N.Y., and attended the local high school, where he excelled in math and science.

In his senior year, he was accepted to the Macaulay Honors College at CCNY to study biomedical engineering. "I decided to go somewhere I could combine my interest in medicine, science and math," he recalls. "Biomedical engineering was the perfect mix and CCNY had a reputation as the best program in the city."

Not only did admission to Macaulay cover Jaeseung's tuition and provide other benefits, but it also "allows you to do things you want but would not otherwise be able to," he said. In his freshman year he began working in Dr. Yuying Gosser's lab and went to the University of Osnabrueck in Germany as a summer exchange student after his sophomore year.

After the research experience in Germany, Jaeseung developed an interest in medical technology. He learned about a research group at Memorial Sloan-Kettering Cancer Center (MSKCC) that studied the application of nanotechnology to detect and treat cancer. He wrote to Dr. Jan Grimm, the principal investigator, and was accepted into his lab in his junior year.

There he did research on branched gold nanoparticles, also known as gold nanostars, and he recently received a National Science Foundation Graduate Research Fellowship to support his plan to develop a new type of branched gold nanoparticle for use in cancer detection and treatment. He'll carry out the work as a PhD student in Harvard University and Massachusetts Institute of Technology's joint program in medical engineering and medical physics.

Attending CCNY as a Macaulay student not only provided Jaeseung with an excellent education, but also a love and appreciation for New York City and its diversity. "You meet and make friends with people from everywhere in the world," he says. 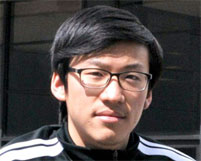 "I decided to go somewhere I could combine my interest in medicine, science and math. Biomedical engineering was the perfect mix and CCNY had a reputation as the best program in the city."
-Jaeseung Hahn