Michael Hattem, a 35-year-old high school dropout from New  Jersey who earned his GED, spent most of his twenties working a series of  dead-end jobs.  When his first son was  born in 2006, he realized he had to do something with his life.

He enrolled  at Borough of Manhattan Community College.   Once there, he found a goal to aim for: going to graduate school to  study history.  During the second half of  his freshman survey course in American history, his professor allowed him to do  research in lieu of a term paper.  "I  enjoyed the experience of doing research and felt like it was something I could  do well," he said.

After a year in the CUNY Baccalaureate  Program, he transferred to City  College.  "It seemed that CCNY was CUNY's  flagship school and I liked its historical character," he said.  "I also wanted to work with Professor Darren  Staloff, since I had read some of his books and listened to his recorded  lectures."

Professor  Staloff let Michael do research in his first semester.  There would be more papers to come in his  budding field of interest, pre-revolutionary New York City.  One paper, written for the department's  honors research colloquium in his junior year, was one of only four papers  selected nationwide to be published in "The Columbia Undergraduate Journal of  History."

Impressed  by Michael's accomplishments, which include a 3.94 GPA, multiple departmental  awards and a Thomas W. Smith Fellowship, his professors advised him he had a  "good shot" at getting into a top PhD program.   But, getting there would require additional sacrifice.  With the support of his fiancé and family,  along with fellowship and award money totaling over $11,000 in the last two  years, he quit his part-time job so he could focus on his studies.

The gambit  paid off. After he graduates from CCNY, Michael and his family will move to New  Haven, Conn., where he will begin work on a PhD at Yale University with a  University Fellowship that covers tuition, living expenses and health insurance  for him and his growing family for the next five to six years.

"Being highly motivated on its own isn't enough," he  says.  "I've been very fortunate, and  I've benefited immensely from the outstanding faculty here.  Professors Staloff and (Greg) Downs really  went out of their way to work with me, and the improvements I've made over the  past two years in my research and writing are a reflection of their amazing  commitment to their students and the department." 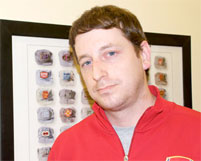