Mohamed Jallow is completing his master's degree in public administration.  He is part of The Charles B. Rangel Center for Public Service, which provides  support for City College's graduate program in Public Service Management.

Mohamed is a native of Sierra Leone, a traumatized country  in West Africa better known for conflict diamonds, and a brutal civil war,  which ended in 2002.  His experiences  during the civil war have always guided his academic journey and contributed to  his enduring passion for Africa's future.

"Call me an idealist, but I feel it is imperative for people  like me to have a stake in making the continent better for future generations,"  he says. "I was raised loathing government in general and public service in  particular. I incorrectly associated all those who pursue a career in it as  corrupt and incompetent."

This he attributed to his upbringing, in a country where the  very mention of government strikes fear in the hearts of citizens, as it is  associated with brutality and chaos. With an excellent education at City  College that includes a BA in international studies (2008), he has a different  attitude about government and public service now.  This is evident in his activities outside the  classroom.

Mohamed was a Franklin Williams Fellow at the Council on  Foreign Relations in 2010, and is now a full-time program associate at the  organization.  He blogs frequently for  the Colin Powell Center for Policy Studies' Powell Network Blog, where he was  an Ambassador John Price fellow, and Critique Echo, a German-African newspaper  where he writes on contemporary African politics and U.S. policy toward  Africa.  During his time with the Rangel  Center, Mohamed served as a graduate research assistant, where he worked on  minority education trends

"I am very grateful for the opportunity, and rigorous  academic development I received from the Rangel Center and the City College,"  said Jallow. I hope current students can take advantage of all the  opportunities the college provides. 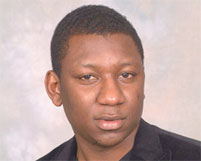 "Call me an idealist, but I feel it is imperative for people like me to have a stake in making the continent better for future generations."
- Mohamed Jallow