As a student at Stuyvesant High School, Elizabeth Kelman performed extensive volunteer work, including trips to Mexico and Nicaragua. The experiences planted in her the seeds of a passion for public health that were nurtured at City College. "I feel that helping people through public health is a way to make an impact on a large scale," she said.

Making a difference socially best defines Elizabeth's time at CCNY. She was named a Kenan Leadership Scholar in 2011 for her exemplary commitment to social justice. That year, she also studied at the Comprehensive Rural Health Project in India and did a stint interning at Earth Day Network in Washington, DC as a Rosenberg/Humphrey Scholar in Public Policy.

She is just as committed in her backyard. As a leader of the City Agriculture Network, a City College student organization, she is a food and community activist. She maintains an organic community garden one block north of campus, and coordinated the CUNY FoodFEST conference.

Barbara Syrrakos, a history lecturer who taught Elizabeth in her honors World Civilizations class as well as her Food and Farming class, describes her as "a fabulous person all around: very bright, with easy leadership qualities, fluent in Spanish and community-minded."

A week after the Macaulay Honors College student receives her BA in global health, Elizabeth will fly to the Dominican Republic to spend 10 weeks as an intern with Project HOPE, an international health care organization. It is her third and final internship as part of the Jeannette K. Watson Fellowship, which she won in 2011.

When she returns, the New York native looks forward to working and earning a master's degree in public health to further prepare for a career in international health. 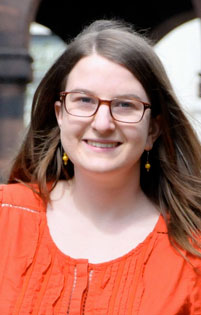