When he came to City College from his native Jamaica, Jermaine Lawson aspired to become an architect.  However, he was closed out of the introduction class for the fall semester of his freshman year, so he took a biology class instead.  That decision changed his direction in life.

He will graduate this May with a BS in biology.  Next fall of 2010, he will begin his first year as a PhD student in neuroscience at the University Of Massachusetts Medical School in Worcester.

"My journey has been a long and challenging one, and I believe that attending The City College of New York was well worth the hard work and dedication," he said.  Shortly after he started at CCNY he lost his mother and grandmother, and he was forced to support himself by working while going to school.

The Bedford Stuyvesant, Brooklyn, resident's goal now is to find solutions for brain disorders.  "I believe that the brain is the most foreign and complex organization of systems the universe has to offer," he explained. "The biggest concern that drives my interest pertains to the degeneration of the brain and the fact that many of the causes are equivocal."

Throughout his CCNY career, Jermaine has been engaged in research.  In 2004, he became a member of the Dominican Republic Project, which investigated changes in marine biodiversity over the last 25 million years.

However, after his grandmother succumbed to Alzheimer's disease that year, he wanted to learn more about the malady.  The next year, he joined Professor Tadmiri Venkatesh's lab, which studies neurodegeneration using Drosophilia as a model system.

During his first year with the lab, he earned an outstanding mentee award.   In spring 2008, he was awarded an International Neuroscience Fellowship to conduct research at the Ramon y Cajal Institute of Neuroscience in Madrid, Spain. He is co-author of a paper titled "Glia mediated neurodegeneration, temperature sensitive paralysis and lifespan reduction by targeted activation of the Anaphase Promoting Complex in Drosophila," which has been accepted for publication. 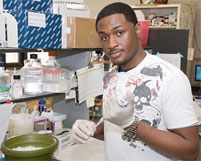 "My journey has been a long and challenging one, and I believe that attending The City College of New York was well worth the hard work and dedication."
- Jermaine Lawson