In six  years, Jian Liu went from a young immigrant with limited English to an ace  student whose aptitude in math would earn him a $100,000 fellowship and a  ticket to New York University.

The story  begins in 2006, a year after Jian and his family arrived from China.  Still polishing up his English, Jian took  part in a Science,  Technology, Engineering, and Mathematics (STEM) summer program at City College.  That experience would prove to be a defining moment.

"I learned  a lot of more in math and physics than my other high school friends and because  of the support and great experience I had, I decided to study math at CCNY," he  said.

Fast forward to 2011.  Jian is graduating with a BA in pure  mathematics, minors in secondary math education and physics, and a bushel of  awards. The list includes the 2011 Zitrin Scholarship and 2009 Eber Scholarship,  from CCNY's Student Support Services Program (SSSP), and membership in the Chi  Alpha Epsilon national honor society's Beta Theta chapter since 2010.  In addition, Jian is a 2011 fellow of the CUNY Graduate Center's Pipeline Honors Program and  a 2011 Ellen Knowles  Harcourt Scholar at the CUNY Teacher Academy at CCNY.

The pick of his honors, however, is a Math for  America Fellowship (MfA), which comes  with a $100,000 stipend. The highly selective, five-year MfA program is for talented students committed to teaching math in  public schools.  In Jian's case, it is  the Brooklyn resident's ticket to graduate school at NYU this June en route to  a teaching career.

Jian said was inspired to teach by  President Kennedy's clarion call to service 50 years ago: "Ask not what your  country can do for you; ask what you can do for your country."

"These words inspired me as a young  immigrant," he explained. "I have learned that when we help others, those  experiences benefit me, as well."

He, in turn, is thankful to Dr. Lorraine Whitman, former director of Teacher Academy  Program at CCNY and Dr. Elizabeth Thangaraj, SSSP director at CCNY, for  mentoring him. 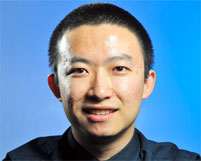 "I have learned that when we help others, those experiences benefit me, as well."
- Jian Liu