Born and raised in the Bronx, Michael McDonald planned to study architecture because he wanted to pursue a major where he could use his creativity. Michael chose City College after being accepted to the CCNY Honors Program.

However, once in the major, Michael had a change of heart and decided to study secondary math education. He had been tutoring students in math and realized that he enjoyed teaching math.

Michael switched to the CCNY Teacher Academy Program in spring 2009. The experience allowed him to see that teaching is what he wants to do for the rest of his life.

"It made me the person I am today," said Michael.

The Teacher Academy Program allowed him to teach at Thurgood Marshall Academy for Learning and Social Change, A. Philip Randolph, and Mott Hall School.
Michael relished the opportunity, explaining: "in a class it's something new everyday."

It was the right decision, as he accumulated a 3.9 GPA along with: making the dean's list every semester; being inducted into the Golden Key International Honour Society; winning the Abraham E. Klein Scholarship for math majors planning to teach, and, ultimately, the Math for America Fellowship (MfA).

The highly selective, five-year MfA program is for talented students committed to teaching math in public schools. It comes with a $100,000 stipend and winners pursue master's degrees in secondary mathematics education with tuition paid in full at CCNY.

Had Michael not gone to City College, he probably would not have discovered his passion for teaching. He thanks CCNY for providing him with the opportunities to be successful as well as a chance to make great friends. 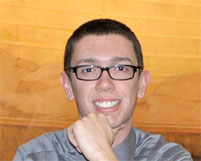 "In a class it's something new everyday. "
- Michael McDonald