It is a common theme among students in City College's Sophie Davis School of Biomedical Education: medical dreams inspired by the loss of a loved one. In the case of Karan Mehta, CCNY Class of 2012 Valedictorian, he already had the dream when he entered the seven-year BS/MD program. However, the death of his father in his second year at CCNY gave him extra motivation to become the best physician he could be.

Mr. Mehta absorbed himself in myriad academic and student activities, and he excelled at every turn. "Exceptionally smart, kind and compassionate," is how one mentor describes him. Another notes that Mr. Mehta has been the best academic performer in his class over the five-year course of study.

Born in Queens to Indian immigrant parents, Mr. Mehta is graduating with a 4.0 GPA and a BS in biomedical science. He will transfer to Albany Medical College in the fall for the final two years of medical school.

His preparation for his future career has been rigorous. He participated in a Global Brigades Mission to rural Panama in 2009, tutored students in general sciences at A.P. Randolph High School and gained clinical experience interning with a primary care practitioner and a urologist. In addition, Mr. Mehta conducted research at Mount Sinai School of Medicine.

Among his honors are: the Dean's Award for Academic Excellence (2012), the Sophie and Leonard Davis Scholarship (2011) and inclusion on the CCNY dean's list all five years at Sophie Davis. "Karan is one of the best students and finest young men I have ever taught in more than 40 years," summed up mentor Edward W. Gresik, professor of cell biology and anatomy at Sophie Davis. Mr. Mehta takes a bashfully modest view of his own academic achievements and being named Valedictorian. "I'm absolutely shocked," he said. "There are so many brilliant students at this school. I'm honored and proud to represent CCNY and look forward to going to medical college and proudly representing CCNY and Sophie Davis." 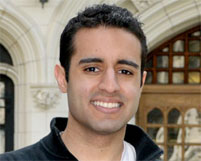 "There are so many brilliant students at this school. I'm honored and proud to represent CCNY and look forward to going to medical college and proudly representing CCNY and Sophie Davis."
- Karan Mehta