Hesham Saleh is the third member of his family to graduate from City College's Sophie Davis School of Biomedical Science. An older sister, Iman (Class of 2007), is an OB/GYN, and brother Ahmed (Class of 2008) is an orthopedic surgeon.

Hesham's Sophie Davis odyssey, however, has not been about keeping a family tradition. The Queens resident, who is graduating with a 3.90 GPA and is bound for NYU School of Medicine this December, has wanted to be a doctor since childhood.

"I probably expressed my first public interest in medicine on dress up day in second grade.  I put on a white coat and dressed up as a doctor," he said.

His dream would be reinforced by summer visits with ailing relatives in Egypt, his immigrant parents' homeland. These experiences inspired him to excel as a scholar, tutor and student leader at City College, which he entered on a Stuyvesant HS – CCNY Alumni Scholarship awarded to outstanding Stuyvesant graduates.

Hesham has won numerous honors including a National Merit Scholarship (2009) and a Mack Lipkin Broader Horizons Fellowship last summer that enabled him to conduct cardiovascular research in Istanbul, Turkey.

As a tutor, he worked with students at A. Philip Randolph High School on the CCNY campus and the "In Arms Reach" program, which supports children whose parents have been incarcerated. In addition, through much of college, Hesham maintained a part-time job as an SAT tutor at Kaplan Test Prep and is one of the highest-rated Kaplan tutors in the country.

Although currently undecided on what to focus on at medical school, he is passionately looking forward to it and a successful medical career afterward. 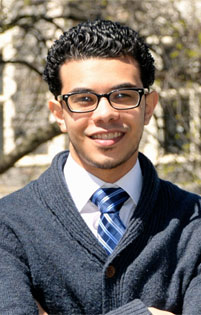 “I probably expressed my first public interest in medicine on dress up day in second grade.  I put on a white coat and dressed up as a doctor.”