MA, Study of the Americas

Nelson Santana has become an exemplary role model for his family. Born in the Dominican Republic, he became the first in his immediate family to earn a college degree. Now, he has gone further, completing a master's in the Study of the Americas program at CCNY's Division of Interdisciplinary Studies with a 4.0 GPA. And, he did it while working
full-time as an assistant archivist and assistant librarian at the CUNY Dominican Studies Institute.

"Nelson is a concrete representation of the kind of students that attend the Center for Worker Education, CCNY, and CUNY at large," says Dr. Ramona Hernández, director of the CUNY Dominican Studies Institute. "Coming from very impoverished socioeconomic background, Nelson has not allowed this circumstance to stop him from achieving his educational goals."

Santana pursued graduate work in the Study the Americas at CWE because it incorporated his love of culture and his ability to study Latin America and the Caribbean. For his thesis, he wrote on "The Political Theology of Juan Paulino's Club Cívico y Cultural Juan Pablo Duarte." His thesis aimed to show how Roman Catholicism helped fuel the founding of one of the earliest Dominican organizations and creation of the statue of Juan Pablo Duarte.

Nelson isn't resting on his laurels. With one master's degree on his resume, he will begin work toward an MS in Library and Information Science from Drexel University, supported by a Dean's fellowship. Once he's done, he intends to earn a PhD. 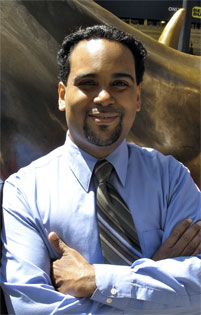 "Nelson is a concrete representation of the kind of students that attend the Center for Worker Education, CCNY, and CUNY at large."