Even though she has been doing research and winning science prizes since high school, Arielle Scardino doesn't see herself as only a science person. When she enrolled in the Macaulay Honors College at CCNY, Arielle, who grew up in Kings Park on Long Island, was torn between her love for science and the humanities. A talented artist like her mother,
she considered an art career, and, at times, leaned toward English, history, law and engineering.

Since 2007, Arielle has interned every summer in Cold Spring Harbor Laboratory's DNA Learning Center, and then its Harlem DNA Learning Center, where school-age children can learn how to sequence DNA. She also enrolled in an art class every semester and learned to speak Japanese; she even spent a month in Tokyo through Macaulay. One reason Arielle chose to major in biology rather than engineering was because her schedule would allow her to take more electives.

When Arielle graduates with a 3.72 GPA, she will be the first member of her family to earn a bachelor's degree and attend graduate school. She has been accepted to the PhD program in molecular genetics and microbiology at Stony Brook University.

Of City College, she says, "Here is where all my growth takes place." Working on honors research with Professor Shubha Govind, she studied tumors and the immune response in the fruit fly. She received the Paul Margolin Scholarship in 2011 for creativity in research, the President's Award for Excellence in 2009 and the Sharon D. Cosloy Award in 2012.

Arielle contemplates studying viruses and is intrigued by genetic engineering. "Viruses are the original genetic engineers," she said. "Once we understand them, we can design them to do things we don't even know yet." 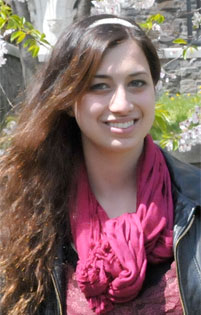 When she enrolled in the Macaulay Honors College at CCNY, Arielle…was torn between her love for science and the humanities.