Nothing could keep Veronica Velásquez from fulfilling her dream of becoming an architect; not even a job at a Times Square coffee shop. When she learned there was an opening for her in City College's Spitzer School of Architecture, she hung up her apron and hopped on the subway to get to the studio on time. "Everybody was already building
models, and I didn't even have a piece of paper," she recalls.

She caught up quickly, however, and became one of the school's top undergraduates. Associate Professor Marta Gutman calls Veronica "an absolute delight — a talented, smart, engaging architecture student, who has social justice issues at the core of her being." Her thesis project is a civic center for Moravia, a lower-income neighborhood situated
alongside a landfill in Medellín, Colombia, her hometown. She has also volunteered with the J. Max Bond Center on Design for the Just City.

Veronica's passion for architecture was ignited in high school back in Colombia. Her father, who moved to Brooklyn, encouraged her to study here. She applied to CCNY and was accepted to the Grove School of Engineering, but she never stopped trying to transfer into architecture.

While professors like Marta Gutman, Alan Feigenberg, Alberto Foyo and Lance Brown taught her much and helped her to see new ways to do things, she says she learned the most from her classmates. "I'm with them 5 – 10 hours a day. They become your professors, your consultants and your family."

Veronica will spend part of her summer after graduation at the Fountainebleau School architecture program in France. While she currently works for an interior design firm, her long-term interests are in urban planning. 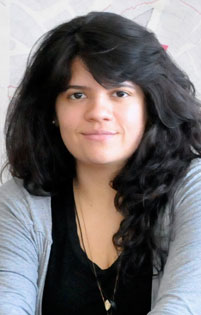 "I'm with (classmates) five – ten hours a day. They become your professors, your consultants and your family."
- Veronica Velasquez