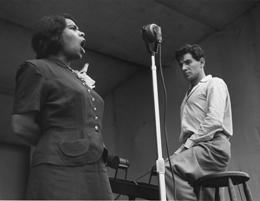 The City College of New York, in collaboration with the Harlem Arts Alliance, presents “Harlem in the City,” a weeklong festival of activities celebrating Harlem as a cultural and intellectual force for New York City, America and the world.

The festival runs October 1 – 7, and will be preceded by the opening on Thursday, September 20, of “Harlem & the City Over 100 Years of Special Moments in Time,” a photo exhibit on the College’s Amsterdam Avenue plaza. The exhibit will serve as a soft launch for the festival.

“Strengthening ties between City College and the Harlem community is one of (CCNY) President Lisa S. Coico’s primary goals,” said Dr. Myrah Brown Green, executive director of arts and culture at City College, who is coordinating the festival. “Through this festival we are bringing Harlem to campus and, at the same time, encouraging our students to become part of this diverse, culturally rich community that is our home.”

An opening reception for the “Harlem & the City: Over 100 Years of Special Moments” photo exhibit will kick off the festivities Thursday, September 20 from 5:30 – 7:30 p.m. on the North Academic Center plaza along Amsterdam Avenue at W. 137th Street. The exhibit will take the viewer on an historic journey that stretches from 1847, the year of CCNY’s founding, through the mid-1980s. It will remain on display until the end of December, weather permitting.

The exhibit will feature images capturing iconic Harlem moments, by master photographers such as Gordon Parks, Sophie Bramly, Kwame Braithwaite, James VanDerZee and Jamel Shabazz, as well as photographs from the City College Archives. Among the highlights are photos of Emperor Haile Selassie with Adam Clayton Powell Jr. at Abyssinian Baptist Church; Marian Anderson rehearsing with Leonard Bernstein for a concert in Lewisohn Stadium; and early images of hip-hop pioneers, such as Afrika Bambaataa, Kano and the Sugar Hill Gang.

The festival will offer an assortment of events, to include art exhibits, lectures, panel discussions, film screenings, tours and poetry readings.

A complete schedule of events follows.

1 p.m. New Orleans-style second-line parade opens the festivities with a band accompanying members of the City College and Harlem communities. The parade begins at Aaron Davis Hall and proceeds along Convent Avenue to W. 140th Street.

6:30 – 9 p.m. Screening and discussion of “The Barber of Birmingham,” a documentary featuring interviews with barber James Armstrong and other Alabama African-Americans who participated in the struggle for civil rights in cities like Birmingham and Selma during the 1960s. Theatre B, Aaron Davis Hall.

12 noon – 2 p.m. “Poetry @ the Gates.” City College students, faculty, staff and Harlem community members will have the opportunity to read and recite poetry at the gates along Amsterdam Avenue between the North Academic Center and Townsend Harris Hall.

10 a.m. – 5 p.m. Series of docent talks and tours through the CCNY campus to visit the “Harlem in the City,” “Colors of Change” and “Harlem Past and Present” exhibits.