Martin and Michele Cohen Give CCNY $10 Million for Science 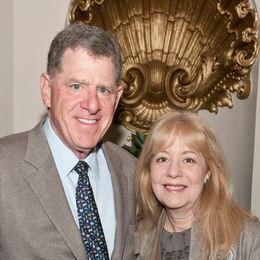 The City College of New York today announced a $10 million gift for its Division of Science from alumnus Martin Cohen, ’70, and his wife, Michele. The gift, the largest ever for the Division, will establish the Martin and Michele Cohen Dean of Science at CCNY, the first endowed deanship in the College’s 165-year history. It also funds endowed professorships and provides funds for faculty and student support. The gift is subject to approval of the CUNY Board of Trustees.

“This transformative gift will enable our Division of Science to position itself alongside science programs at the best public research universities in America,” said CCNY President Lisa S. Coico in announcing the gift. “On behalf of the entire City College community I want to thank Marty and Michele Cohen for their extraordinary vision, leadership and generosity.”

“The Cohens’ generous gift will significantly enhance CCNY’s outstanding reputation in the sciences, and I am deeply grateful for their partnership,” said CUNY Chancellor Matthew Goldstein. “Their tremendous support of faculty and student work across the Division of Science reinforces the University’s ongoing efforts to advance scientific research and proficiency through our Decade of Science initiative. Together, we will ensure a cutting-edge science program that strengthens student learning and expands our research capacity.”

“When I came to City College in 1965, it was a preeminent science and engineering institution,” said Mr. Cohen. “With a new president and provost who are both accomplished scientists and a new science building scheduled to open in 2014, we have an opportunity to restore CCNY to the preeminent position it once held.”

Mr. Cohen, who is co-chairman and co-CEO of Cohen & Steers, a New York-based investment company, says the science education he received at CCNY was integral to his success in business. “The quantitative and analytical skills that I developed as a science major have helped me enormously in life.”

“City College was an important part of Marty’s life when he was a student and it is an even more important part of his life now,” said Mrs. Cohen. “His love and knowledge of science have served him well in life, and this gift is a wonderful way for us to pass on the joy of education to others.”

Mr. Cohen serves as chair of The City College 21st Century Foundation, the College’s principal fundraising arm. He also serves on the Board of Governors of Hebrew Union College – Jewish Institute of Religion. Mrs. Cohen is a member of the Board of Trustees at Alfred University, New York’s Museum of Arts and Design and the University of Vermont Foundation.

By establishing the Martin and Michele Cohen Dean of Science, the gift from the Cohens will enable City College to recruit an eminent scholar in his or her field to provide academic leadership to the Division of Science. A nationwide search to fill the position is underway, noted City College Provost Martin Moskovits.

The gift also creates the Cohen Fund for Science to be applied toward start-up costs to establish the endowed deanship and professorships. It includes funds for laboratory renovation and equipment, paid student internships, graduate student research fellowships and education expenses, postdoctoral student stipends and student travel to national conferences.

“Having faculty and graduate students who are doing exciting work creates good research opportunities for undergraduate students,” Provost Moskovits added. “The effect of the gift will strengthen the entire enterprise to encompass every area of science on campus.”