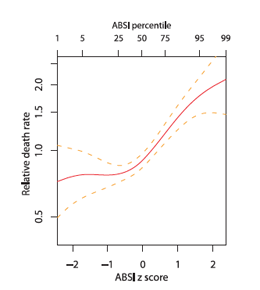 Death rate rises as ABSI score goes up. People with very high ABSI (in the 98th percentile) have more than twice the average risk of dying early. 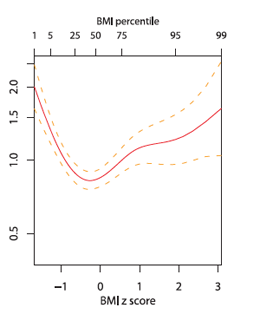 Death rate is high for both high and low BMI scores. A high BMI predicts 1-1/2 times the average risk of death from obesity; a low BMI also shows a high risk of early death.

A new measure of obesity developed by a City College of New York researcher and a physician predicts early death better than BMI.

BMI, or Body Mass Index, has long been the most common and convenient way to estimate a person’s percentage of body fat. Obesity is a leading cause of death worldwide. However, BMI is a poor predictor of when someone has entered the danger zone and is at risk of dying early.

“One criticism leveled at BMI is that it doesn’t distinguish muscle and fat mass, so that it doesn’t tell you if you have too much fat,” said Dr. Nir Krakauer, assistant professor of civil engineering in CCNY’s Grove School of Engineering, and study coauthor.

Professor Krakauer and his co-author, Jesse Krakauer – a physician who happens to be his father – set out to correct this weakness. They improved on BMI’s predictive power by creating a new index that incorporates body shape into the calculation called ABSI for “A Body Shape Index.” Their report appeared July 18 in the journal PLoS ONE.

As ABSI increases, the mortality risk from obesity climbs. “We were able to demonstrate that those that have a high ABSI showed high rate of death over a five-year period,” said Professor Krakauer.

Unlike BMI, the calculation of ABSI includes waist circumference; another measurement used to estimate body fat. The additional variable helps account for the increased hazard faced by people who carry most of their fat around the middle – those with the so-called “apple” body shape.

As a civil engineer, Professor Krakauer focuses mainly on how climate change and human activities affect the Earth’s water and carbon cycles. He turned his hand to medical data, in part, because analysis in both fields involves extracting patterns from huge data sets. These patterns help test hypotheses about what is going on in a system.

Through his endocrinologist father he learned about the similarities between the fields. “My dad had been doing body composition work for a long time, but there was always the problem of a lack of evidence for how useful (body composition) was for quantifying risk,” he explained. “My experience with looking at large data sets helped in evaluating hypotheses.”

The father-son team analyzed medical exam and mortality data for more than 14,000 adults who participated in the National Health and Nutrition Examination Survey. Professor Krakauer wrote programs to pull patterns out of the data. They found that death rates in the group increased with ABSI, growing nearly exponentially as the ABSI score rose above average.

Individuals with very high ABSI (in the 98th percentile) had more than double the average risk of dying early. Those with a low ABSI showed a less than average risk.

An equally high BMI, on the other hand, predicts an elevated risk of death only one and a half times the average. A very low BMI also shows a mortality rate twice the average, making it a confusing indicator.

ABSI predicted risk of death across age, sex and weight. It also correctly forecast mortality for Americans of European and African origin, but was less effective for those of Mexican ancestry, something the Krakauers do not have data to explain.

Although the researchers cannot yet address the effect of dropping one’s ABSI, the authors speculate that building muscle in a way that reduces belt size could make a person healthier, even without losing weight.

For those with the highest scores, “you could treat them more aggressively,” said Professor Krakauer. “You could reduce waist circumference and ABSI and you might be able to reduce their risk.”

Going forward, the team may look at how body composition x-rays, which directly measure fat and muscle mass, could act as a health-screening tool to give an even more detailed picture of risk.